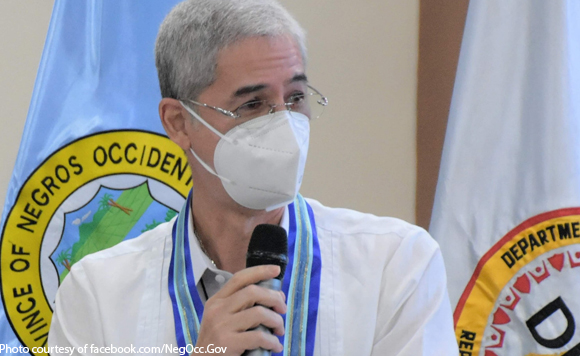 A total of 222 or 36.94 percent of the 601 barangays in Negros Occidental have been declared drug-cleared as of this month, records of the Philippine Drug Enforcement Agency (PDEA) showed.

Governor Eugenio Jose Lacson made this announcement during the Provincial Anti-Drug Abuse Summit 2021 held at the Negros Residences on Friday as he recognized the progress made by PDEA – Negros Occidental.

Although the figures showed that the province’s campaign is gaining ground, Lacson said there is more to be done.

“With more than 60 percent yet uncleared, we know that we still have a long way to go. Today’s summit was called precisely for the purpose of addressing such actuality,” he said in his message.

Aiming for 70-percent drug-cleared barangays, Lacson urged the stakeholders and other participants to use the activity as a venue to fully explore and discuss all the possibilities and the most effective strategies to eradicate the use and trade of illegal drugs in Negros Occidental.

“May the outcome and resolutions of this summit bring about the prospect of (a) drug-free Negros Occidental, made possible by the collective knowledge, expertise, dedication, commitment, and firm resolve of the people present. The success or failure of our campaign will be to a great extent shaped by what we will chart, design, and plan today,” he added.

Department of the Interior and Local Government (DILG) 6 (Western Visayas) Assistant Director Maria Calpiza Sardua said the problem of illegal drugs is not just the concern of the government, but everyone in the community.

“Let us all work hand in hand and be involved in making the Province of Negros Occidental drug-free, which will contribute to having a drug-free region and drug-free Philippines,” Sardua added.

The activity, themed, “Mag-ugyon, Makigbahin, Papason ang Droga” (Unite, Participate, Eliminate Drugs), was organized by Negros Occidental and attended by members of the Regional Oversight Committee 6, including those from the PDEA, DILG, Philippine National Police, and Department of Health.

Also present were the chief executives of various cities and municipalities, barangay officials, and representatives of civil society organizations, among others. (PNA)