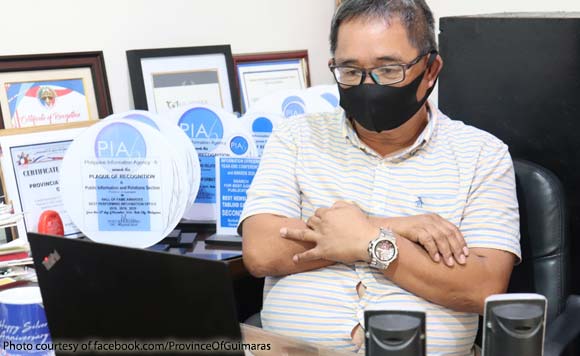 0 287
Share
Want more POLITIKO News? Get the latest newsfeed here. We publish dozens and dozens of politics-only news stories every hour. Click here to get to know more about your politiko - from trivial to crucial. it's our commitment to tell their stories. We follow your favorite POLITIKO like they are rockstars. If you are the politiko, always remember, your side is always our story. Read more. Find out more. Get the latest news here before it spreads on social media. Follow and bookmark this link. https://goo.gl/SvY8Kr

Guimaras Governor Samuel Gumarin imposed more restrictions on the movement of people to curb the spread of Covid-19 pandemic in the province.

Gumarin issued Executive Order No. (EO) 24 on Saturday after the Department of Health placed the province under critical risk in terms of health capacity.

The following measures will take effect on Monday, June 7 until further revoked or amended: (https://bit.ly/2RsfCBh)

-There shall be a limitation of ports of entry to Jordan wharf, Buenavista wharf, and RORO wharf (Jordan). Sebaste wharf in Sibunag, Puyo wharf in Nueva Valencia and Tacay wharf in Buenavista shall be opened for trading/cargo purposes only; other borders not mentioned shall remain closed.

-Only highly essential travels such as transport of basic commodities and necessities, medical reasons, exercise of profession and work related transactions and other meritorious cases as may be determined by the provincial government shall be permitted.

-Individuals found to be Covid-19 positive and those who show symptoms referable to Covid-19 shall be denied entry, except in cases of medical referrals from the province.

-Returning or visiting persons coming from outside Western Visayas shall continue to be governed by EO 12.

-Closure of business establishments except those that are considered essential such as markets, groceries/convenience stores, sari-sari stores, pharmacies, gasoline stations, water refilling stations, banks, money centers, clinics, and hospitals among others. Dine-in restaurants are, however, suspended until further notice.

-All on-going construction projects shall be permitted provided that it shall comply with business operating hours mandated in this order.

-Mass gatherings, including religious gatherings, are suspended. Meetings and/or gatherings initiated by the government to address the Covid-19 pandemic, as well as the distribution of government grants and subsidies to the residents are allowed, provided that minimum health protocols shall be strictly observed.

-Residents of the municipalities of Nueva Valencia, Sibunag and San Lorenzo are restricted from going to the municipalities of Jordan and Buenavista, except for reasons of work or work related transactions; medical reasons; to access essential goods; and for some meritorious grounds as determined by the provincial government.

-Residents of the municipalities of Jordan and Buenavista are restricted from going to other municipalities, except for reasons of work or work related transactions; medical reasons; and for some meritorious grounds as determined by the provincial government.

-Municipal mayors must effectively establish local border restrictions, such as the setting up of border control points, in coordination with the Philippine National Police, among others.

-Inhabitants of areas placed under “lockdown” by proper authorities shall comply with the guidelines issued in connection thereto.

-Ambulant vendors, peddlers and agents, and their regular selling and collection activities, to include “bulante” and other related transactions, are temporarily restricted and suspended;

Subject to additional guidelines to be issued by the municipal governments concerned on operating hours and protocols, the following are the schedule of markets which shall remain open every day:

*Residents of Jordan – At their own convenience

*Residents of Buenavista – At their own convenience