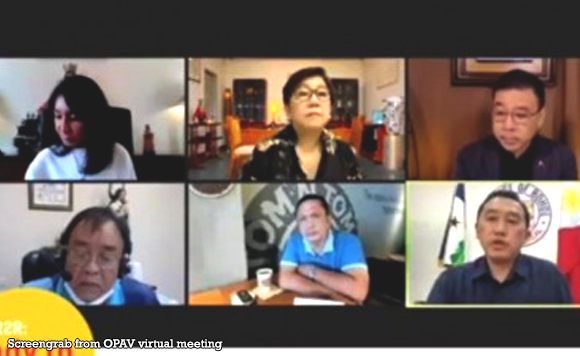 0 85
Share
Want more POLITIKO News? Get the latest newsfeed here. We publish dozens and dozens of politics-only news stories every hour. Click here to get to know more about your politiko - from trivial to crucial. it's our commitment to tell their stories. We follow your favorite POLITIKO like they are rockstars. If you are the politiko, always remember, your side is always our story. Read more. Find out more. Get the latest news here before it spreads on social media. Follow and bookmark this link. https://goo.gl/SvY8Kr

CEBU CITY – The governors of the four provinces in Central Visayas are eyeing a unified agreement to reopen the region’s tourism industry in their respective areas.

Governors Gwen Garcia of Cebu, Arthur Yap of Bohol, Roel Degamo of Negros Oriental, and Zaldy Villa of Siquijor have agreed to meet on August 12 in the province of Siquijor, the only Covid-free island in this region, to discuss the common concerns on tourism and reopening the regional economy.

The governors are looking at reviving the inter-island tourism to help one of the country’s tourism-dependent regional economies recover from the economic downturn.

The Office of the Presidential Assistant for the Visayas (OPAV) will organize the governors’ meeting in collaboration with the Department of Trade and Industry (DTI), Department of Tourism, Department of Agriculture, and the National Economic and Development Authority.

The suggestion to hold such a meeting was raised by Garcia during a virtual meeting hosted by OPAV with the governors, together with DTI Assistant Secretary for Regional Operations Asteria Caberte.

Garcia pointed out that it is better for the four island provinces “to work together” and agree on the possibility of reopening tourism to their domestic tourists.

Yap cited that Bohol is now eyeing a travel bubble to support its economy which is very much reliant on tourism apart from agriculture.

“If Cebu is dependent on tourism, more so with Bohol. We’re now looking at exploring bilateral agreements in arrivals,” Yap noted.

Also known as travel corridors, travel bubbles are essentially an exclusive partnership between neighboring places that have demonstrated considerable success in containing and combating the Covid-19 pandemic within their respective borders.

Garcia said now is the best time to revive the tourism industry as quarantine measures in the four island provinces have started to ease in recent weeks.

Garcia suggested that the four provinces must agree on the same protocols that must be followed once tourism activities come back to business.

“We will meet so we can discuss how we can work on this tourism exchange,” she said, citing that the provincial government has been working on the gradual revival of tourism activities here.

The other three governors agreed to implement the planned inter-island tourism revival as they seek to bolster their local economies which are significantly dependent on tourism. (PNA)