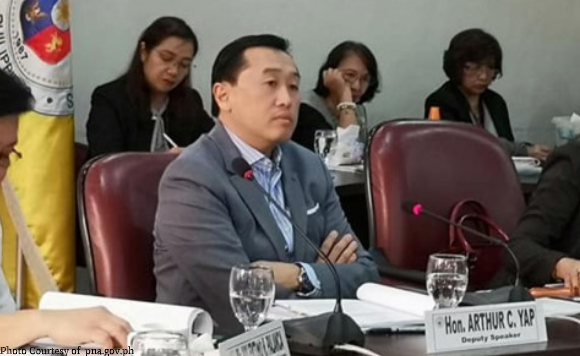 In his executive order (EO) no. 17, which is effective immediately, Yap ordered Boholanos to hold their drinking sessions inside their respective homes only.

The order makes it “unlawful for any person to sell, furnish, offer, buy, serve or take alcoholic drinks and beverages anywhere in the province of Bohol” except inside dwellings or private premises.

Those who are not dwellers of the same house could face sanctions, it said.

“Alcoholic drinks and beverages purchased for consumption at home or in private premises shall be allowed,” the EO read.

Yap said he decided to impose partial liquor ban to prevent the residents from congregating in another house to drink alcohol.

“It shall be prohibited for a person intoxicated or under the influence of liquor to go out of his residential premises or to public spaces,” the EO added.

Yap directed the police and barangay officials to ensure strict implementation of EO 17, underscoring “there is a need to control the accumulation of people on confined spaces to ensure proper social distancing and to prevent the spread” of coronavirus disease (Covid-19).

Yap noted that drinking sessions typically done in close groups and in households tend to defeat the required physical distancing as mandated by health authorities to avoid human to human transmission of the viral disease.

“One of the primary means to effectively contain the spread of Covid-19 is to implement social distancing and limiting close person-to-person contact,” he said.

“There is also a need to minimize the consumption of alcohol in order to ensure healthy well-being and not to compromise the immune system to mitigate the risk of being infected with the virus,” he added.

He said a partial liquor ban will help “maintain peace and tranquility in the neighborhood during nighttime.”

Yap also cited a provision of Republic Act (RA) 7160 or the Local Government Code of 1991 which empowers the governor to issue executive orders for the strict enforcement of laws and ordinances during and in the after math of man-made and natural disasters and calamities.

RA 19121 or the Philippine Disaster Risk Reduction and Management Act of 2010 defines “disaster as a serious disruption of the functioning of a community or a society involving widespread human, material, economic, or environmental losses and impacts, which exceeds the ability of the affected community or society to cope using its own resources” and “disaster impacts include disease.” (PNA)

Continue Reading
beerBohol ProvinceBoholanoshomesrhum inside
0
Share
Politiko would love to hear your views on this...
Trending News
More Stories