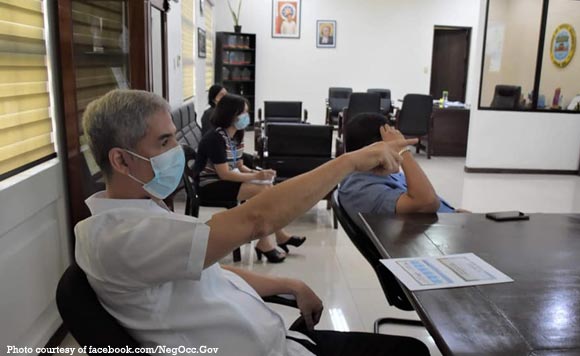 BACOLOD CITY – The Negros Occidental provincial government is exercising caution in accepting its residents, who are overseas Filipino workers (OFWs), still stranded in Cebu, which has the highest number of coronavirus disease 2019 (Covid-19) cases outside Metro Manila.

“If you are stranded in Cebu, please understand. Cebu City is No. 2 as far as (number of) cases is concerned. That’s why we’re extra careful of Negrenses coming from (there),” Governor Eugenio Jose Lacson said in a press conference at the Capitol Social Here on Tuesday.

He said those who will come home to Negros Occidental must already be tested negative, and also have to undergo a 14-day mandatory quarantine in the provincial government facility once they arrive in the province.

“We’re about to receive OFWs from Cebu, but if they don’t have test results (to show they are free from Covid-19), we are extra careful,” the governor said.

Lacson said even the local government units in the province are also not ready to accept the returning residents, who will eventually have to go home to their respective localities after the quarantine.

Some of the OFWs who returned to Negros Occidental have been tested positive for Covid-19, including the two of the 35 who traveled from Tabuelan, Cebu to Escalante City on April 14. They were listed as third and fourth cases of the province.

Patient No. 3 is a 38-year-old man, who traveled from The Netherlands and arrived in the Philippines on March 24. He is a resident of Silay City.

Meanwhile, Patient No. 4, a 50-year-old man, arrived in the country from Ireland on March 17. He is from Candoni town.

Both are still quarantined at the Provincial Healing Center, a patient care center managed by the provincial government in E.B. Magalona town.

They are among the seven positive cases in Negros Occidental, including three other OFWs, who arrived in the province on April 28 via the Malasakit Voyage of 2GO Group’s M/V St. Leo the Great. (PNA)