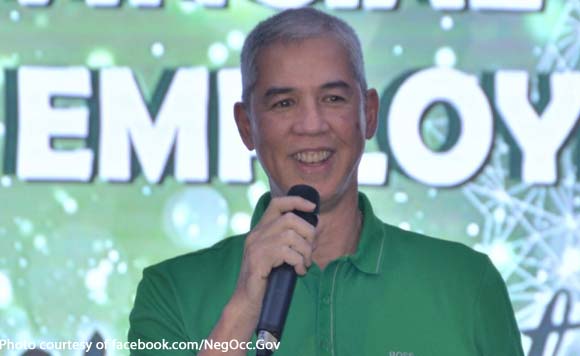 0 763
Share
Want more POLITIKO News? Get the latest newsfeed here. We publish dozens and dozens of politics-only news stories every hour. Click here to get to know more about your politiko - from trivial to crucial. it's our commitment to tell their stories. We follow your favorite POLITIKO like they are rockstars. If you are the politiko, always remember, your side is always our story. Read more. Find out more. Get the latest news here before it spreads on social media. Follow and bookmark this link. https://goo.gl/SvY8Kr

This year, the provincial government of Negros Occidental will try to outdo its performance in 2019, Governor Eugenio Jose Lacson said.

“We are now at the start of a new decade and are expecting everybody to do his or her share in the service of the Negrense,” he added.

Aside from the renovation of the Panaad Stadium in Barangay Mansilingan in Bacolod City, the governor announced that four major provincial government-run hospitals in Silay, Cadiz, Valladolid, and Kabankalan will also be upgraded this year. (https://bit.ly/2Fqyy9V)

There will also be an increased subsidy for Negrense athletes who are joining national and international competitions to encourage them to do better in bringing honor to the province, according to him.

Lacson said the province is hosting the Australian-Asian Chamber of Commerce Summit this year, which is expected to boost economic and business activity in Negros Occidental.