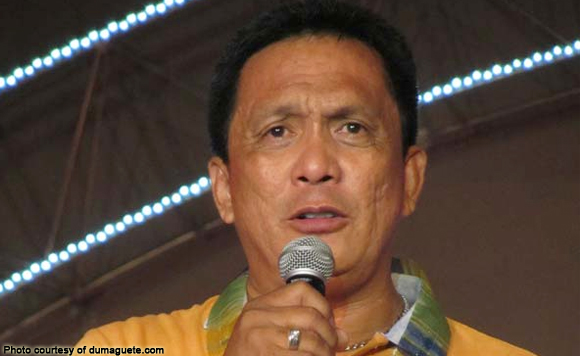 0 1,261
Share
Want more POLITIKO News? Get the latest newsfeed here. We publish dozens and dozens of politics-only news stories every hour. Click here to get to know more about your politiko - from trivial to crucial. it's our commitment to tell their stories. We follow your favorite POLITIKO like they are rockstars. If you are the politiko, always remember, your side is always our story. Read more. Find out more. Get the latest news here before it spreads on social media. Follow and bookmark this link. https://goo.gl/SvY8Kr

DUMAGUETE CITY — Negros Oriental Governor Roel R. Degamo has asked the Armed Forces of the Philippines (AFP) and the Philippine National
Police (PNP) to address the insurgency and push the New People’s Army
(NPA) out of the province by seeking the reactivation of the “Bayanihan” concept.

Degamo said Thursday he was incensed by recent atrocities reportedly committed by the NPA, which included the burning of heavy equipment used in the construction of roads in the province’s hinterland barangays.

“I don’t want insurgents here in the province. I am not joking, I am not fooling around with my job. Therefore, you terrorists, you don’t have a place in the province because those of us from Negros Oriental embrace peace and order,” he said in the vernacular.

The governor said he was out to improve the lives of the people in the hinterland barangays and started the construction road networks in the mountains from Pansiao, Luyang in Mabinay up to Cabcacaban in Bindoy because this is the clamor of the people.

He told a meeting of the Joint Provincial Security Coordinating Center earlier that he has been working so hard to provide the people with basic services but “the Left did not recognize this.”

Degamo asked for the help and cooperation of the people, local chief executives, the army and the police to drive away the insurgents out of the province.

Despite the call to fight, the governor reiterated that peace can’t be achieved through guns and bullets.

Degamo called on the PNP and the Army to reactivate the “Bayanihan” concept similar to what the 79th Infantry Battalion (IB) and the 11th IB did before, in cooperation with the Magdegamo medical and dental missions, so that the people in the hinterlands would experience true and genuine government “so dili na sila moadto sa walhong kalihokan (the people would no longer go to the leftist movement).”

The Internal Peace and Security Plan “Bayanihan” was a campaign of the AFP and shared and co-authored by other stakeholders in the non-government sector in winning the peace while the Magdegamo medical and dental missions were conducted in the municipalities and cities in the province.

He also tasked the different intelligence communities here to enhance their information gathering while directing the inter-agency Task Force Leon Kilat and other law enforcement agencies to continuously seal the province from any form of terrorism and spillovers from Mindanao, secure the province from bomb attacks, and kidnapping of foreign nationals.

The governor also warned coddlers of “terrorist groups or members of terrorist organizations” that he would not hesitate to use all his powers to pull them out of the province. (PNA)