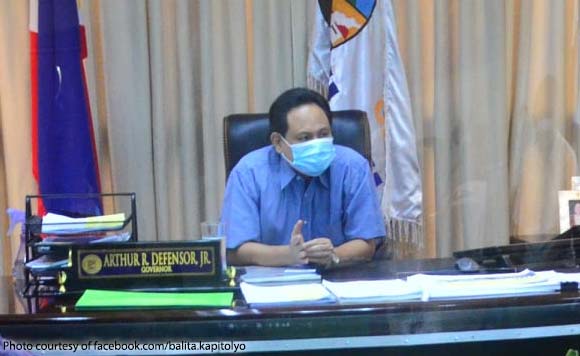 0 118
Share
Want more POLITIKO News? Get the latest newsfeed here. We publish dozens and dozens of politics-only news stories every hour. Click here to get to know more about your politiko - from trivial to crucial. it's our commitment to tell their stories. We follow your favorite POLITIKO like they are rockstars. If you are the politiko, always remember, your side is always our story. Read more. Find out more. Get the latest news here before it spreads on social media. Follow and bookmark this link. https://goo.gl/SvY8Kr

Iloilo Governor Arthur Defensor Jr. has yet to decide on his vice-gubernatorial bet for the 2022 elections.

The filing of candidacies is scheduled in the first week of October.

But, Defensor said he has talked to three potential running mates in his first re-election bid. (https://bit.ly/3nDnttd)

The ruling PDP-Laban party member declined to disclose the names as he has yet to finalize anything with them.

“I don’t feel free to talk about it if I haven’t arranged anything with them. Usually, when you talk, make arrangements, I ask what I can say publicly,” the governor said.

“So with all due respect to the people we’ve been talking to, there’s no leeway yet, because they’re not related to the affairs of the state and of the province. If it’s about the programs and projects of the province, I won’t have a problem talking to them,” added Defensor.