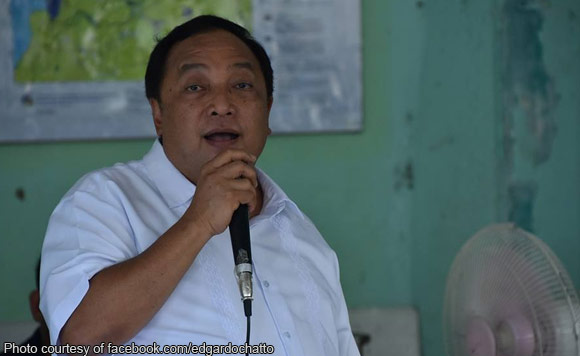 0 2,002
Share
Want more POLITIKO News? Get the latest newsfeed here. We publish dozens and dozens of politics-only news stories every hour. Click here to get to know more about your politiko - from trivial to crucial. it's our commitment to tell their stories. We follow your favorite POLITIKO like they are rockstars. If you are the politiko, always remember, your side is always our story. Read more. Find out more. Get the latest news here before it spreads on social media. Follow and bookmark this link. https://goo.gl/SvY8Kr

TAGBILARAN CITY — Governor Edgar Chatto on Friday welcomed any information about local government officials allegedly involved in the drug trade in the province as insinuated by some critics.

The statement of the Bohol governor came on the heels of pronouncements by the opposition and some sectors that they would soon expose the names of government officials allegedly in cahoots with drug traders.

Reports have also been circulated by some local media outlets that a matrix of drug personalities in the province would soon be released to the public.

In his reaction, Chatto said he is personally awaiting the release of such list of alleged drug personalities in government. He added that should there be solid evidence against the suspected government officials, he would not hesitate to push for their prosecution.

Chatto, during a media forum on Friday, said the province has intensified its campaign on eradicating the drug problem as can be seen in the arrests made by the police almost daily.

He said the province has been able to turn the drug problem around, as well as help in the campaign to bring down the demand on the illegal substances, with the assistance of the four pillars of the criminal justice system.

The Drug Enforcement Unit of the Tagbilaran City Police Station seized a total of 4.2 grams of shabu with a street value of P50,000 from four suspects identified as Ruben Niones, 40; Jeriel Iadab, 24; Hazel Suete, 30; and Eduardo Montero, 40.

The Provincial Intelligence Branch of the Bohol Police Provincial Office, on the other hand, confiscated 25 grams of shabu estimated to worth P295,000.

Two suspects were arrested in the PIB operation. They were 39-year-old Jesus Navea and Mark Anthony Abucay, 31. (PNA)