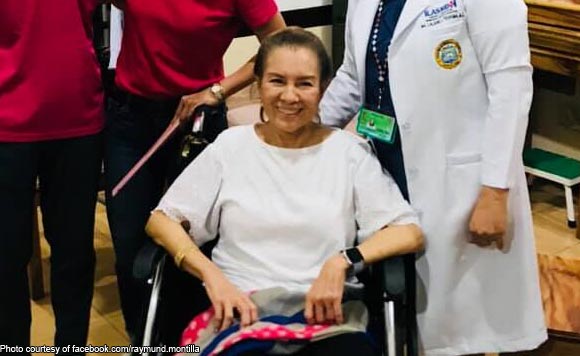 Running unopposed in the fifth district, Ma. Lourdes “Marilou” Arroyo-Lesaca was the first among the seven congressional candidates in Negros Occidental, including Bacolod City, to be formally declared as winner in the mid-term elections.

Garnering a total of 105,227 votes, Lesaca was proclaimed on Wednesday by the Provincial Board of Canvassers, chaired by Election Supervisor Salud Milagros Villanueva, at the canvassing hub located on the second floor of the Capitol Social Hall here.

Lesaca, sister-in-law of House of Representatives Speaker Gloria Macapagal-Arroyo, has identified Isabela as her hometown in the province.

The former Kasangga Party-list representative told reporters after her proclamation that she considered it a privilege to serve the people of the fifth district, where the Arroyo family comes from.

She appealed for cooperation from her constituents and asked everyone to move on from politics for the good of the district.

When she filed her Certificate of Candidacy (COC) last October, Lesaca said she believed there was “unfinished business” in the district after her brother, Ignacio “Iggy” Arroyo, passed away midway through his term as congressman in 2012.

The PBOC also proclaimed the two winners for board member in the fifth
district, Agustin Ernesto Bascon and Rita Gatuslao, who defeated three
other candidates to clinch the provincial posts.

Bascon, the outgoing mayor of Himamaylan City and a candidate of the Nationalist People’s Coalition, garnered 86,033 votes while Gatuslao, who was fielded by the ruling United Negros Alliance, obtained 70,538 votes. (PNA)