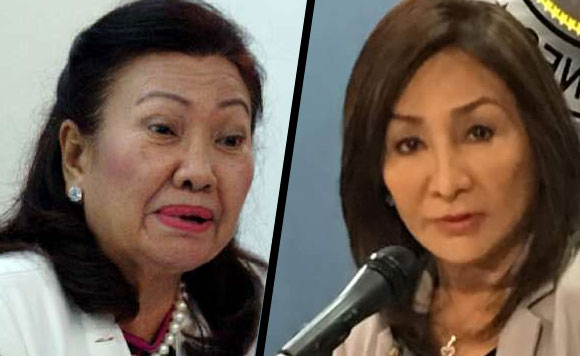 0 1,789
Share
Want more POLITIKO News? Get the latest newsfeed here. We publish dozens and dozens of politics-only news stories every hour. Click here to get to know more about your politiko - from trivial to crucial. it's our commitment to tell their stories. We follow your favorite POLITIKO like they are rockstars. If you are the politiko, always remember, your side is always our story. Read more. Find out more. Get the latest news here before it spreads on social media. Follow and bookmark this link. https://goo.gl/SvY8Kr

CEBU CITY — It will be an all-female gubernatorial showdown in the May 2019 mid-term elections in Cebu.

This developed after Governor Hilario Davide III filed his certificate of candidacy (COC) for vice governor on Tuesday, confirming rumors that he would give way to Vice Gov. Agnes Magpale, who will now be running against (3rd District) Rep. Gwendolyn Garcia for the Capitol’s top post.

Magpale, however, has yet to file her COC pending the issuance of her Certificate of Nomination and Acceptance by the Nationalist People’s Coalition (NPC).

Davide, who is running under the Liberal Party, was accompanied by his father, former Chief Justice Hilario Davide Jr., his wife Jobelle, his children, Magpale, and some of his supporters when he filed his COC at the Office of the Provincial Election Supervisor.

In a press conference at the Vice Governor’s Office, Davide said the switch does not mean he’s afraid to run against Garcia but it is for the good of the people of the province.

“I’m not afraid to run against Garcia. My decision to run for vice governor and asking Vice Gov. Agnes Magpale to run for governor came without reservations. It was borne out of our outstanding partnership. I firmly believe that Agnes as governor will continue our journey to good governance,” Davide said.

He said his decision was not because of his low rating in the surveys as well but because he has seen Magpale to be a much better leader considering her work ethics and expansive political experience.

Aside from being popular in the rural areas, Davide said Magpale also has a direct contact with Malacañang which would be beneficial to the province.

“I know that the President (Rodrigo Duterte) has a soft heart for the vice governor and I believe she could provide more services to the people if given the chance to serve as governor,” Davide said.

Magpale, for her part, said she is thankful to be given the opportunity to run for governor and vowed to continue Davide’s projects and the programs of the Duterte administration as well if elected in May.

Meanwhile, six other aspirants for government office also filed their candidacies on Tuesday.

Cebu provincial election supervisor Marco Lionel Castellano said re-electionists — Reps. Ramon Durano VI of the 5th District, Wilfredo Caminero of the 2nd District, and Peter John Calderon of the 7th District – filed their COCs along with Miguel Antonio Magpale, Rosemarie Durano-Sybico, and Jose Mari Salvador, who are all running for a seat in the Provincial Board. (PNA)