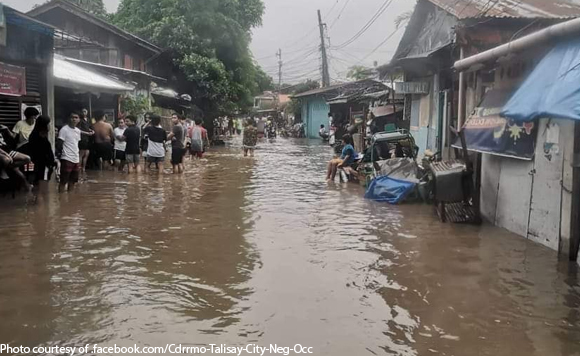 The cities of Victorias and Talisay in Negros Occidental declared a state of calamity due to flooding on New Year’s Day.

Strong rainfall triggered flash floods that submerged these cities in deep water, forcing thousands of people to evacuate from their homes.

In Victorias City, 9,028 families in 19 villages were adversely affected. Some 46 houses were totally wrecked while 183 others were partially damaged. (https://bit.ly/35kT60Z)

On on hand, 4,661 families in 17 barangays were affected while 21 houses were considered totally damaged and 244 partially damaged in Talisay City.

“We can now utilize the calamity fund to assist the affected families,” Victorias City Mayor Francis Frederick Palanca said, adding that the city government will allocate P25 million to procure a dredging machine.

Talisay City Mayor Neil Lizares III, for his part, pushed for quick response assistance to the victims and for long-term solutions to address flood problems.