Garcia matriarch passes away at 82 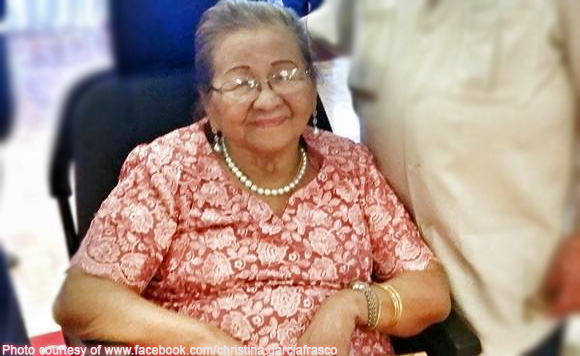 Inday’s death was announced by her granddaughter, lawyer Christina Garcia-Frasco, who conveyed the family’s call for prayers “in this time of deep and unbearable grief.”

“She will be sorely missed by her family, and by countless others whose lives were made better, richer and more meaningful because of her presence, her gift of laughter, her counsel, her compassion, her work and her love,” the family said in a statement published by Sun.Star Cebu.

Inday finished her law degree at the University of San Carlos in Cebu, where she met Pabling, her future husband. She then worked as a clerk of court and later on a judge.

The former judge was best remembered for leading the creation of Cebu CFI Community Cooperative, which started in 1970 with P200 as capital and 29 original members.

“With her guidance, love and devotion, the cooperative has grown into one of the biggest in the country with over P10 billion in assets and more than 90,000 members nationwide,” the Garcias said.

Inday is survived by her husband and their children Gwen, Dierdre, Winston, Nelson, Marlon, Byron, Farla and Pablo John. Interment is set on February 7.