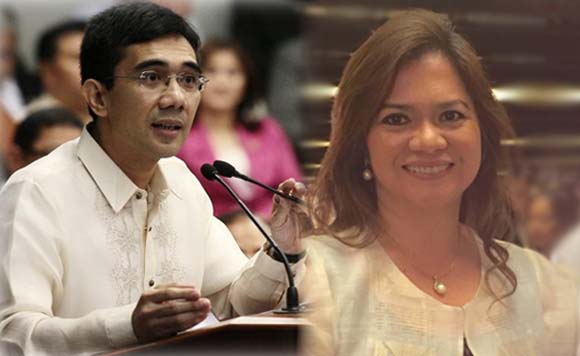 Feeling betrayed by the Tupas clan, the Garin political family in Iloilo has decided to challenge their former allies in the upcoming 2016 elections.

1st District Rep. Oscar Garin, Jr. said the family decided to have his sister run for vice governor because the Tupases “deceived” them.

Christine is running under the National Unity Party (NUP), which, Garin said, was the Liberal Party’s (LP) “advice” on them.

The Garins were caught surprised by Tupas’ move to run for vice governor, saying they have a prior agreement to field a common candidate for the vice governor seat.

They claimed the Tupas family did not consult them.

Garin said his family “sacrificed” for the unity of LP that fielded the tandem of Gov. Arthur Defensor Sr. and Vice Gov. Raul Tupas in the 2013 election.

Garin was a first-termer vice governor from 2010 to 2013. But instead of seeking re-election, he ran for Congress and gave way to the pairing of Defensor and Raul Tupas.

Defensor, the LP provincial chair, pointed out it was the party’s decision to have Tupas run for vice governor, instead of the Garins.

For his part, Tupas justified his run for vice governor’s seat.

“It was impossible for us to agree on a common candidate because both our families want to field family members for the position.

We allowed the national (LP) leadership to decide and they granted the nomination to our family,” Tupas said.

Tupas is a staunch ally of President Aquino and served as one of the prosecutors in the impeachment trial of former Supreme Court chief justice of Renato Corona.

Garin is the husband of Health Secretary Jeanette Garin.