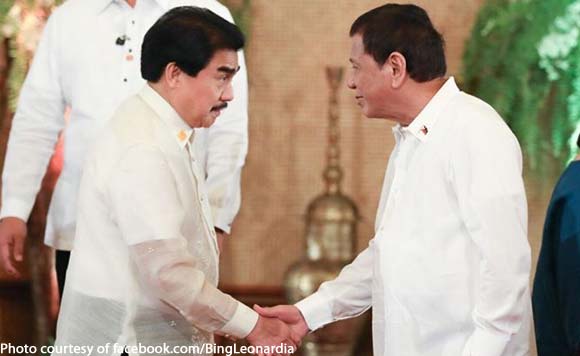 0 619
Share
Want more POLITIKO News? Get the latest newsfeed here. We publish dozens and dozens of politics-only news stories every hour. Click here to get to know more about your politiko - from trivial to crucial. it's our commitment to tell their stories. We follow your favorite POLITIKO like they are rockstars. If you are the politiko, always remember, your side is always our story. Read more. Find out more. Get the latest news here before it spreads on social media. Follow and bookmark this link. https://goo.gl/SvY8Kr

Familiaran, who represented the mayor during the joint command conference of the National Task Force-End of Local Communist Armed Conflict in Malacañang on Monday, said he also thanked Duterte for endorsing him, the mayor and Bacolod Rep. Greg Gasataya during the last election.

During the meeting, the President emphasized the policy direction of his administration and discussed issues involving his plan to suspend the importation of rice, revive the Reserve Officers Training Course, and implement programs for the poor, particularly in conflict-affected areas. (https://bit.ly/2OBVLu2)

Familiaran said the purpose of the meeting was to address armed conflict through peaceful means by providing problem areas with projects, education and livelihood programs.

This is the strategy of the Duterte administration, he added.