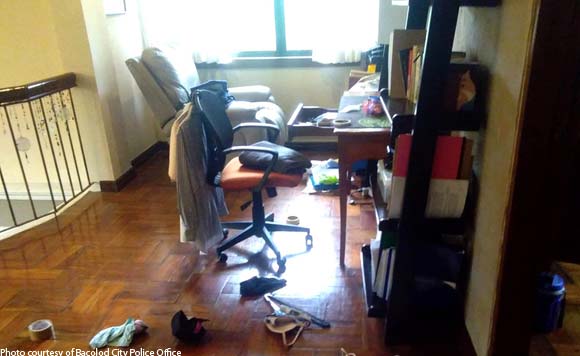 0 742
Share
Want more POLITIKO News? Get the latest newsfeed here. We publish dozens and dozens of politics-only news stories every hour. Click here to get to know more about your politiko - from trivial to crucial. it's our commitment to tell their stories. We follow your favorite POLITIKO like they are rockstars. If you are the politiko, always remember, your side is always our story. Read more. Find out more. Get the latest news here before it spreads on social media. Follow and bookmark this link. https://goo.gl/SvY8Kr

A former congressman’s brother lost some P1.4 million in valuables to robbers who broke into his house in Barangay Tangub in Bacolod City Wednesday afternoon, Feb. 19.

Police are gathering leads on the robbery at the house of Dr. Carlitos Orola, a brother of councilor Bartolome Orola and former Rep. John Orola.

One of Orola’s household helpers went outside to check but the two persons threatened her at gunpoint and forced her to open the gate.

The robbers then hogtied the housemaid, took the house keys, and stashed her in the second floor of the house. The other housemaid was asleep in their room.

The robbers then entered four rooms and carted away the valuables. They fled on board a white van.

Gever said they are eyeing more than three suspects, and they already have one person of interest.

He said the robbers probably monitored the house prior to the heist.

Police said the driver saw suspicious individuals near the area recently, likely checking when Orola was not home.

Gever said he cannot say if there was inside job in the robbery. The persons at the house during the incident were also investigated.