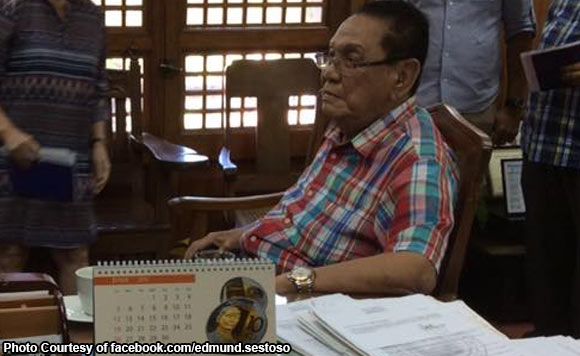 0 423
Share
Want more POLITIKO News? Get the latest newsfeed here. We publish dozens and dozens of politics-only news stories every hour. Click here to get to know more about your politiko - from trivial to crucial. it's our commitment to tell their stories. We follow your favorite POLITIKO like they are rockstars. If you are the politiko, always remember, your side is always our story. Read more. Find out more. Get the latest news here before it spreads on social media. Follow and bookmark this link. https://goo.gl/SvY8Kr

The Office of the Ombudsman has found probable cause to charge former Negros Oriental Herminio Teves (3rd district) with graft and malversation over alleged “ghost projects” worth P10-million.

The Ombudsman is set to file one count of violation of Section 3(e) of the Anti-Graft and Corrupt Practices Act (Republic Act No. 3019) and one count of Malversation of Public Funds against Teves and his chief of staff, Hiram Pulido, and Technology and Livelihood Resource Center (TLRC) representatives Antonio Ortiz, Dennis Cunanan, Marivic Jover, Belina Concepcion and Francisco Figura.

According to the Ombudsman, its investigators uncovered documents showing that the former congressman’s P10million PDAF, originally intended for livelihood projects for the depressed barangays in the 3rd district was instead used to fund “ghost projects.”

“It will be recalled that in December 2006, the congressman requested the release of his 4th tranche of PDAF allocations and selected the TLRC as implementing agency and the Molugan Foundation, Inc., as conduit non-government organization,” the Ombudsman said.

However, the investigators found out that the Molugan Foundation did not have the capacity to implement the project as it was incorporated only in 2007, the year it was tasked to implement the PDAF project.

It was also found out that no public bidding was conducted and that the NGO’s place of incorporation and the whereabouts of its incorporators both yielded negative results.

“Despite being a ghost project, respondents facilitated the approval of the disbursement voucher and check for the NGO in a single day,” said the ombudsman.

Meanwhile, the COA Special Audits Office Report and Notice of Disallowance disclosed that the projects supposedly funded by Teves’ PDAF were ghost or inexistent as there were no documents of its implementation or actual fund utilization.

In defense, the veteran lawmaker claimed that “his signatures appearing in various documents linking him to the transactions are products of forgery.”

The Ombudsman junked this defense and stated that “forgery is not presumed; it must be proved by clear, positive and convincing evidence and the burden of proof lies on the party alleging forgery as mere variance of the signatures in different documents cannot be considered as conclusive proof that one is forged.”

According to Ombudsman Conchita Carpio Morales, “certainly, this illegal conversion and transfer of public funds to the Molugan Foundation, purportedly for projects which did not actually exist, represent quantifiable pecuniary losses to the government constituting undue injury within the context of Section 3(e) of R.A. No. 3019.”