Espenido is locked and loaded for Iloilo tour of duty 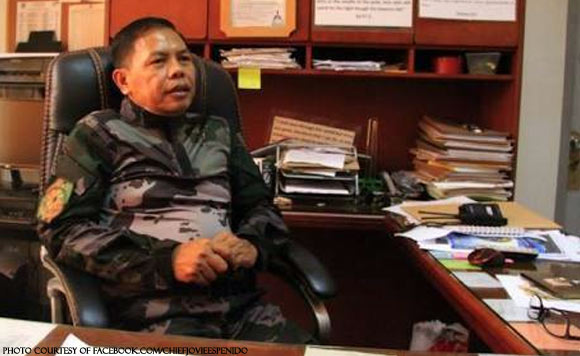 Police Chief Inspector Jovie Espenido on Tuesday assured that he would respect human rights in his transfer to Iloilo City which President Rodrigo Duterte claimed as the “most shabulized” province and its chief, Mayor Jed Mabilog, a narcopolitiko.

Duterte deployed Espenido to Iloilo after a succeful tour of duty in fighint drugs in Leyte and Ozamis City.

Last July 30, the Ozamiz police chief led the anti-drug operations in Ozamis city which resulted in the death of Mayor Reynaldo Parojinog Sr. and 14 others.

The slain mayor’s children, Vice Mayor Nova Princess Parojinog-Echavez and Reynaldo Jr., were arrested during the raid and later charged with drug possession and illegal possession of firearms.

He said he was merely following orders of the President to go hard on criminals and drug suspects and that he believed that the case was a form of payback from the Parojinogs.

Accompanied by lawyer Andres Fernandez, Espenido denied allegations of rubout during the series of raids in Cabinti and Balintawak villages. The complaints were filed by relatives of Francisco Manzano, one of the nine suspected robbers killed during the encounter.

“Obviously,the accusations are all fabricated and a product of the concoctions at the instance of her grandmother, who has been used by Mayor Parojinog and his group as a tool against me,” read his affidavit.

“It is very unfortunate that complainant has succumbed to the pressure by the Parojinog group. Understandably, she is helpless. I know fully well that this case is sponsored by the Parojinog group because the suspects involved were members of their armed group, and, more importantly to stop me from doing my job as a police officer,” it stressed.

Espenido insisted that it was a legitimate operation and that the robbery suspects were killed after they shot it out with the policemen.

“It was a legitimate police operation. In fact the complainant herself has a sworn statement that it was the group of the criminals who fired their firearms first even before the police could disembark from their vehicles,” Atty. Fernandez told reporters in an interview after the hearing.
Police recovered firearms, pieces of jewelry, and sachets of suspected shabu from the suspects during the raids.(PNA)