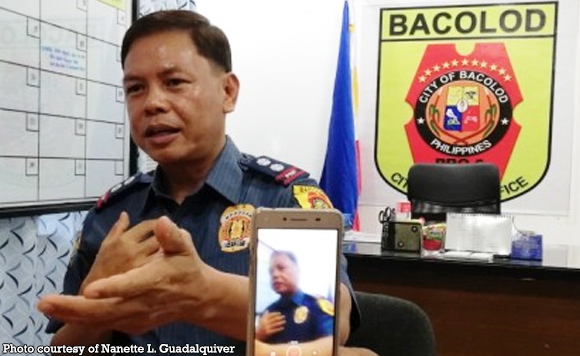 BACOLOD CITY — Back after almost two months of vacation, Lt. Col. Jovie Espenido on Wednesday resumed his duties as police deputy for operations and chief of the special anti-drug unit here with an “ultimatum” to illegal drug traders.

Espenido is inviting people behind the organized drug groups operating in Bacolod to meet with him within the month of January as a means to stop the illegal drug supply in the city.

“Not to surrender, but to cooperate. Help the government, help the President, help the police, help me so we can get those who are really involved in illegal drugs,” Espenido said in a press conference at the Bacolod City Police Office (BCPO) headquarters.

“You’re very welcome to my office. Let’s talk. If anyone, a barangay official or any known or influential person will come with you or bring you, I will accommodate you. Only this month of January, by February makita niyo na, at least, magkasubukan tayo,” he added.

Espenido took a vacation leave, which was approved while he was still assigned in Ozamiz City, after he joined the Bacolod police force in October last year upon the orders of President Rodrigo Duterte.

After he reported to duty this week, the celebrated police officer bared his plans to the local media as he questioned why the illegal drug trade in Bacolod could not be solved.

“We will continue to fast-track efforts to end the problem on illegal drugs in Bacolod. I’ve learned that the problem has been existing for a long time. There are many apprehensions, but the question is, why the supply doesn’t stop? There should be an end to all of these if the police will work hard to put a stop to illegal drugs,” Espenido said, talking in a mix of English, Tagalog, and Cebuano to get his message across.

He said that during his stint in Albuera, Leyte, the police were able to disband the Espinosa drug group in 18 days, and in Ozamiz City, the Parohinog group was dismantled in five months.

In Ormoc City, where he accused the top official of links to the Espinosa operations, the source of illegal drugs was stopped in 45 days, he added.

Despite leading the bloody drug operation in Ozamiz that led to the death of Mayor Reynaldo Parojinog and 14 others, Espenido said he would rather bring peace to Bacolod “na walang hulihan, walang patayan.”

He mentioned at least five organized drug groups believed to be operating in Negros Island, including Bacolod, such as the Tolentino, Divinagracia, Ramos, Camaria, Cuadra, among others.

Espenido also described Bacolod as “shabulized”, considering the large volumes of illegal drugs recovered during police operations in the city.

Moreover, Espenido stressed the importance of local government unit (LGU) support to the police, particularly on logistics, to solve the illegal drug problem.

“I placed Espenido there, ‘yung kinatatakutan nila na pulis (the police officer people are most scared of),” the President added.

Last January 10, operatives of Police Station 3 confiscated 1.205 kilos of suspected shabu with a street value of PHP18.075 million in a buy-bust at Barangay Taculing.