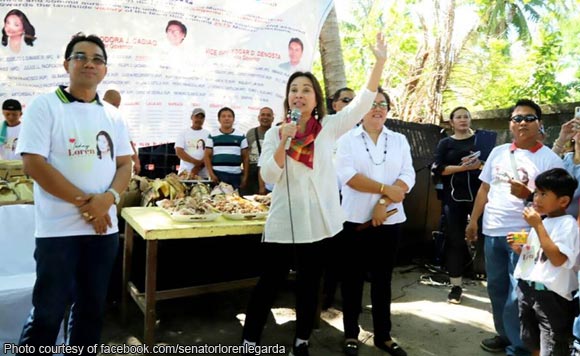 0 844
Share
Want more POLITIKO News? Get the latest newsfeed here. We publish dozens and dozens of politics-only news stories every hour. Click here to get to know more about your politiko - from trivial to crucial. it's our commitment to tell their stories. We follow your favorite POLITIKO like they are rockstars. If you are the politiko, always remember, your side is always our story. Read more. Find out more. Get the latest news here before it spreads on social media. Follow and bookmark this link. https://goo.gl/SvY8Kr

The Election Registration Board (ERB) of Pandan, Antique has approved Senator Loren Legarda’s transfer of voter registration from Malabon City to the town of Pandan.

“I humbly and warmly welcome the favorable decision of the ERB of Pandan, Antique. Even with three oppositions filed against my transfer of voter registration, I have been optimistic that I will win the case because I am fully compliant with the law,” the lady politiko said.

A resolution issued by the Sangguniang Barangay said that Legarda has been a resident of Barangay Mag-aba in Pandan since January 1, 2018.

This complies with the requirements of Section 9 of R.A. No. 8189, which states that a citizen “who shall have resided in the Philippines for at least one year, and in the place wherein they propose to vote, for at least six months immediately preceding the election, may register as a voter.”

Meanwhile, Legarda, who is running as congresswoman of Antique’s lone district, called on her kasimanwas to “unite” and “not instigate hate.”

“Let us work together for the good of our people and our beloved province. There is so much we can do for Antique if we are united,” she said.