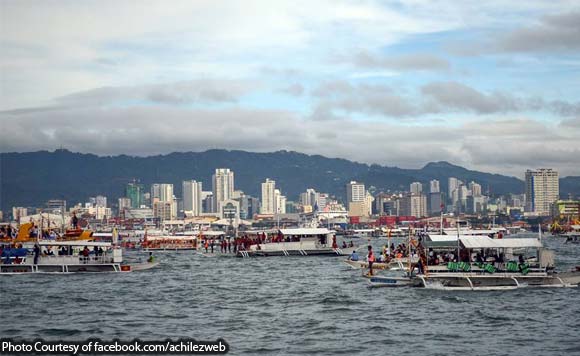 0 353
Share
Want more POLITIKO News? Get the latest newsfeed here. We publish dozens and dozens of politics-only news stories every hour. Click here to get to know more about your politiko - from trivial to crucial. it's our commitment to tell their stories. We follow your favorite POLITIKO like they are rockstars. If you are the politiko, always remember, your side is always our story. Read more. Find out more. Get the latest news here before it spreads on social media. Follow and bookmark this link. https://goo.gl/SvY8Kr

CEBU CITY – Authorities are set to conduct an evaluation of the water in Mactan Channel, which separates mainland Cebu and Mactan Island, following the discovery of hazardous hospital waste materials floating at the channel’s seawater, the Environmental Management Bureau (EMB) in Central Visayas said on Thursday.

EMB-7 Regional Director William Cuñado told the Philippine News Agency in a phone interview that their personnel will coordinate with the Philippine Coast Guard stationed at Cebu in assessing the situation in the channel.

“The process is to conduct sampling upon the waters. We’ll assess if there are hazardous wastes floating in the channel,” Cuñado said.

He said the technical conference conducted earlier found several violations against the waste treatment firm, which they referred to it as “treater” and the hospital, but mentioned only two of them to PNA.

“One of the violations of the treater is their failure to adopt proper manifest in disposing of the hospital wastes. Another is the lack of certificate of treatment (COT), a document that would show that the responsibility over the wastes is transferred from the ‘generator’ which is the hospital to the ‘treater,’” Cuñado said.

The hospital is being penalized because of its negligence in documenting the disposal of its hazardous waste, he said.

During the technical conference, it was discovered that the COT between Chong Hua and the waste treatment company expired September of last year, Cuñado noted.

The lawyers of both the hospital and the firm asked the agency to give them 15 days to refute the alleged violations, the EMB regional director said.

Cuñado said they may discover more violations against the firm as they are scheduled to conduct another round of technical conference. He disclosed that they also discovered wastes which bear the name of University of Cebu Medical Center.

An earlier report also linked the Ignacio Cortes General Hospital to the controversy.

All of these hospitals situated in Mandaue City contracted the Davao City Environmental Care Inc., Cuñado claimed. The firm’s president, Vicente Bosotros, told the PNA that their firm is given 15 days to answer the letter of the technical committee from the EMB-7.

“We refrain from commenting on this issue so as not to preempt the ongoing investigation,” Bosotros said, adding that they have just received on Thursday the notice of violation from the EMB-7. (PNA)