Duterte’s threat to Americans if they didn’t return Balangiga bells: I’ll never be nice to you, I’ll get China! 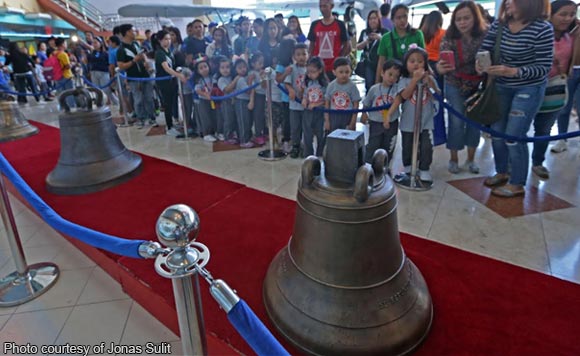 President Rodrigo Duterte revealed that the United States returned the Balangiga bells last year because it was afraid he would abandon them in favor of China.

“Sabi ‘yung sa bell, sabi nila, ‘Are you really mad?’ ‘Yes’. So you know, ordinarily it’s war booty and that’s the culture of the soldiers, to bring along things that belong to the countries that they conquered,” said in a Malacanang speech.

“Pero ito sabi ko: ‘Ang bell you got it at the expense of the lives of so many innocent people and children. You do not return the bell, I will never be nice to you. Forget it. I can always get China’.Isauli ninyo ‘yan, p***** i** hindi sa iyo ‘yan,” he added.

The Americans shipped three bells of the San Lorenzo de Martir Parish Church in Balangiga, Eastern Samar in December last year after its troops took these as war booty 117 years ago.

Duterte credited the Central Intelligence Agency for being the key to the return of the Balangiga bells.

Duterte claimed to have added “drama” to the negotiations by claiming that an ancestor was one of the thousands of Filipinos, including children, who were killed in the payback massacre. “I said: ‘You know, one of those who died there must have been my great, great, great grandfather’. ‘Really?’ ‘Yes!’,” he said. “Wala gud. Pa-drama lang. Eh alam mo naman… Kung sino lang marunong dito magbola, bolahan itong… Great, great, great grandfather. ‘Really? You come from Samar?’ ‘Yes’. ‘Really?’ ‘Yes’. ‘Too bad’. ‘Really, you said it’,” he added.