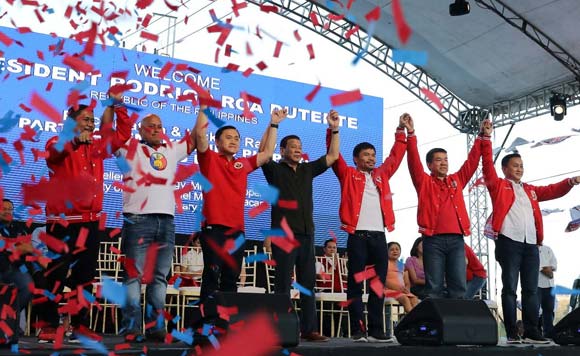 Presidential Assistant for the Visayas Michael Lloyd Dino on Wednesday said they also expect the President to woo the crowd with his speech against illegal drugs and corruption in government offices.

“The President will proclaim before the Cebuanos the five senatorial candidates belonging to the ruling party we fondly call MABAGO KO TO,” Dino told the Philippine News Agency (PNA) in a message.

“This is going to be a biggest political rally that President Duterte will attend in Cebu,” Dino added.

Vice Mayor Edgardo Labella, the party’s bet for mayor in the city, will lead other candidates and more or less 40,000 city supporters in the rally, while Cebu’s Third District Rep. Gwendolyn Garcia who is running for governor under the same party will also lead the bets and supporters from municipalities and component cities in the province.

From the First District of Cebu province, Rep. Gerard Anthony “Samsam” Gullas and his grandfather, former congressman and now Talisay City Mayor Eduardo “Edigul” Gullas, will be joining with candidates and supporters.

Mayor Ronald Allan Cesante from the town of Dalaguete, who is running for congressional seat in Cebu’s Second District under the same party, will also bring with him candidates for mayors, vice mayors, board members, and councilors in the rally.

Lawyer Pablo John Garcia, brother of Gwendolyn, will be attending with candidates in the Third District of Cebu. He is the congressional candidate in the district.

In the fourth district, Rep. Benhur Salimbangon will lead the candidates from the towns and from Bogo City in the Sunday rally. He is seeking for reelection under PDP-Laban.

Former Cebu Port Authority (CPA) commissioner Duke Frasco, who is running as representative in Cebu’s Fifth District, will be joining other candidates in the district.

Engr. Ricardo Mendoza, one of the organizers of the Sunday rally, told the PNA that the political event is open to all residents who wish to listen to the president’s speech and the candidates’ messages.

“All are welcome to attend. However, they are prohibited to bring backpack, ballpen, and bottled water. They can bring cap and umbrella but subject for security check,” Mendoza said. (PNA)