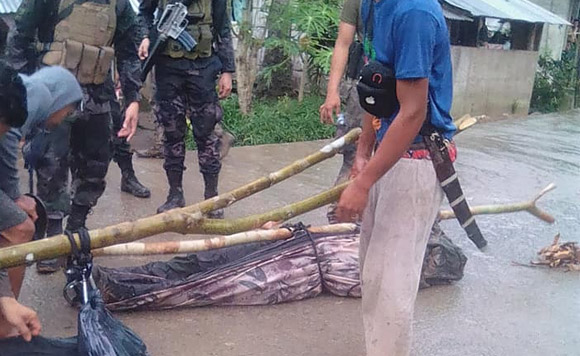 President Rodrigo R. Duterte said the “misencounter” in Sta. Rita, Samar that killed six cops and wounded nine others early this week is his fault, being the top commander of the military and the police.

“I’d like to tell you that the ultimate blame was on me being the Commander-in-Chief because I am their leader. There was a lot of tragic stories around the incident. I told the families to forget it since it was not intentionally done,” Duterte told the crowd gathered at the Balyuan Amphitheater for the Sangyaw Festival Parade of Lights on Friday night.

The Chief Executive delivered his speech after visiting the wake of the slain policemen at the Philippine National Police (PNP) regional headquarters in Palo, Leyte and the wounded policemen at the Eastern Visayas Regional Medical Center.

“You know, the Murphy’s Law operates the way it is. If things can go wrong, it will go wrong. And so I said to the police and soldiers, I am your commander and it’s all my fault. Let us forget the hurt. Allow the investigation to go on and let us see what develops in the future,” Duterte said.

PO1 Julie Escato’s wife Graciel, 29, was “overwhelmed” by the opportunity to personally express her sentiment to President Duterte beside her husband’s coffin.

“The President embraced me and assured us that he will support my children’s education,” said Graciel, who was holding her five-year-old son and one-year-old daughter.

Duterte gave PHP225,000 financial assistance to each family and placed on top of coffins the Order of Lapu-Lapu medal with a rank of Kalasag.

The President arrived at the PNP regional office around 5:25 p.m. and spoke to the families of the six slain policemen for 30 minutes.

Both policemen and soldiers were conducting simultaneous combat operations against the New People’s Army reportedly sighted in Pinabacdao and Sta. Rita towns when the “misencounter” erupted.

The 20-minute gun battle was stopped after soldiers got a call that they were exchanging fire with law enforcers.

The AFP and the PNP formed a board of inquiry to investigate the “misencounter.” (PNA)