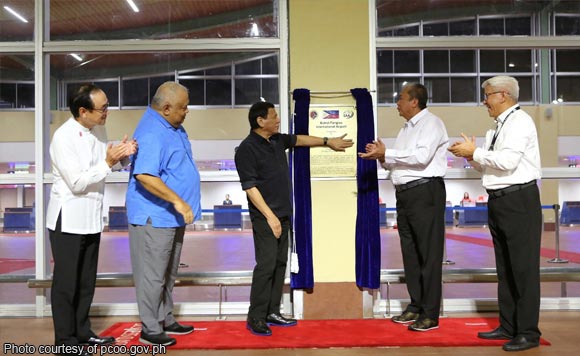 0 599
Share
Want more POLITIKO News? Get the latest newsfeed here. We publish dozens and dozens of politics-only news stories every hour. Click here to get to know more about your politiko - from trivial to crucial. it's our commitment to tell their stories. We follow your favorite POLITIKO like they are rockstars. If you are the politiko, always remember, your side is always our story. Read more. Find out more. Get the latest news here before it spreads on social media. Follow and bookmark this link. https://goo.gl/SvY8Kr

“Be assured of this government’s support as you make Bohol accessible to the world through this new airport,” Duterte told Boholanos in his speech during the inauguration ceremonies on Tuesday.

The President said the BPIA is the country’s first eco-airport designed for both domestic and foreign tourists who want to experience the beauty of Panglao’s pristine beaches and the Chocolate Hills in Carmen, Bohol.

Prior to the President’s arrival and speech, Transportation Secretary Arthur Tugade enumerated the features of the new airport and explained why it is called the “green gateway to the world.”

The new airport features solar panels that provide 30 percent of its electricity needs and has a sewage treatment plant that filters the waste water to be used again or be sent off to the seas, Tugade said.

Local Bohol officials were also on hand, together with Bohol Reps. Rene Relampagos of the first district, Erico Aristotle Aumentado of the second district, and Arthur Yap, of the third district.

Bohol Governor Edgar Chatto was also present, along with some municipal mayors of Bohol, including Leonila Montero of Panglao and Miriam Sumaylo of Dauis. The towns of Panglao and Dauis are both located in Panglao Island, the home of the new 220-hectare airport.

The BPIA is a project of the national government with the support of the Japan International Cooperation Agency (JICA) and was built to international standards.

The new airport is the answer to the growing number of passenger arrivals in Bohol, which is a known crown jewel of tourism in the country. It is being positioned as an alternative gateway to Central Visayas, which will boost the region’s economy and tourism industry.

According to the Department of Transportation (DOTr), the BPIA has a total project cost of P8.914 billion and was designed to accommodate two million passengers a year, a far cry from the capacity of the old airport in Tagbilaran, which can only serve 800,000 passengers per year at the most.

The DOTr also said the BPIA is capable of accommodating four large jets, such as the Boeing 777 or Airbus A330, or seven small jets like the Airbus A321 or A200 on its parking apron.