Dumaguete churches ready to hold Masses of 10 or less 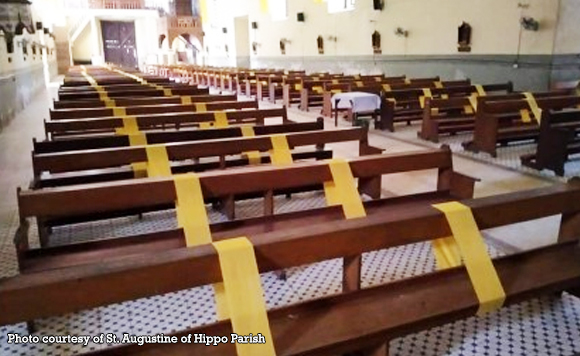 DUMAGUETE CITY – Catholic churches in the Diocese of Dumaguete are now preparing to celebrate holy Masses but with a limited number of attendees.

This, after the provincial government of Negros Oriental allowed the implementation of Omnibus Guideline No. 12 for general community quarantine areas (GCQ) regarding the holding of public religious activities but with “no more than 10 persons” in attendance and “adhering to the prescribed minimum health standards”.

For about two months, Masses and other church-related activities were suspended in the parishes and in the diocese, including those during the Lenten and Holy Week observance, due to restrictions under the general/enhanced community quarantine to stem the spread of the coronavirus disease 2019 (Covid-19).

Msgr. Julius Perpetuo S. Heruela, spokesperson of the Diocesan Task Force on Covid-19, in an interview on Tuesday afternoon, said that as per the guidance of the bishop, parishes that are ready to open their churches beginning today may do so.

The 10 persons that can attend a mass exclude the priest, lectors, choir and altar servers, he said.

However, he appealed to the lay faithful to allow the Catholic Church to “get a feel” of the transition and to observe the prescribed guidelines to ensure the health and safety of churchgoers and not flock to the churches in their parishes.

Dumaguete Bishop Julito Cortes told parish priests that “for parishes that are ready, you may start today (Tuesday). Hopefully, next week and in the coming weeks, 50 percent (of the church attendees per mass) will be allowed, then more, and more, as we go into the (so-called) new normal”.

He quoted Palace spokesperson Harry Roque as saying that transition must be “unti-unti, hinay-hinay, dahan-dahan (gradual)”.

The diocese has prepared guidelines for the smooth transition from the current GCQ guidelines on church-related mass gatherings to modified GCQ, Heruela said.

These include safe physical distancing, such as limiting the number of people seated at the pews, wearing masks, receiving communion by hand, and a controlled number of mass attendees.

Depending on the size of the church, one Mass may be able to eventually accommodate 100 or more attendees, Heruela, who is also the parish priest of the St. Augustine of Hippo Parish in Bacong, Negros Oriental said.

To be able to accommodate the parishioners, the parishes are looking at adding the number of masses especially on Sundays, and for the holding of anticipated masses on Saturdays, he added. Masses will also be held at chapels under a parish’s jurisdiction.

“These are just but a few of the guidelines that we have prepared, but for now we are asking the lay faithful to give the Church leeway for adjustments so as to make the transition easier, even though Masses have resumed in some parishes already starting today,” Heruela said.

Live streaming of Masses will continue under the GCQ, those aged below 21 and over 59 are not allowed to leave their homes, the priest said.

“We know that so many people are very eager to go back to the regular Masses in the church, but we hope that we can do this smoothly as we want to avoid a similar scenario in the early part of May when scores of people flocked to Dumaguete from other towns and cities after the enhanced community quarantine was downgraded,” he added. (PNA)