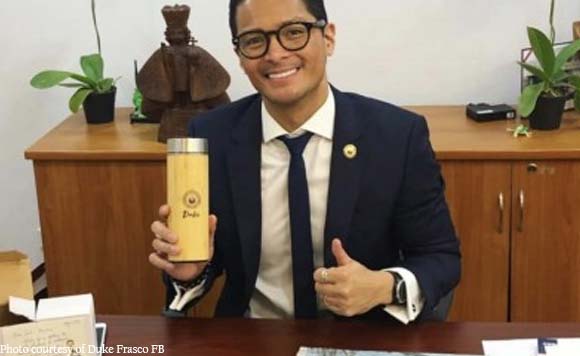 A statement from his office said on Thursday the House of Representatives elected Frasco as the chair of the Committee on Visayas Development during Wednesday afternoon’s session.

In his Facebook post, Frasco thanked his colleagues and House Speaker Alan Peter Cayetano for choosing him “to steward President Rodrigo Duterte’s development agenda for the Visayas”.

The congressman in the fifth district of the province believed in working with other stakeholders in achieving Visayas-wide and Visayas-specific development.

“I am deeply honored and grateful to be elected as the House Committee
Chairman on the Visayas Development… I look forward to working with my
colleagues in Congress, governors, mayors, barangay captains and other
officials of the Visayas,” Frasco said.

“The Committee on Visayas Development will be an effective platform to
address the most pressing issues affecting our communities and
Provinces so we may usher in economic development that will greatly
benefit our fellow Cebuanos and Visayans,” he added.

A separate media statement said Frasco’s election “is seen as a boost
to further develop the Visayan Islands given his previous local chief
executive experience and acumen for community development, fiscal
management, and public infrastructure development”.

It noted the major islands in the Visayas that include Cebu, Bohol,
Leyte, Negros, Panay, and Samar.

It said that Frasco – a three-term mayor of the municipality of Liloan
in Cebu, former vice mayor, and Cebu Ports Authority commissioner –
was instrumental in the transformation of Liloan from a third class to
a first class municipality and multi-awarded local government unit.

“A staunch advocate of education, Frasco started a scholarship program
that has since provided scholarships to over 6,000 students. His
achievements in public administration earned him a Presidential Award
in 2015 as one of the Ten Outstanding Young Men of the Philippines,”
it added. (PNA)