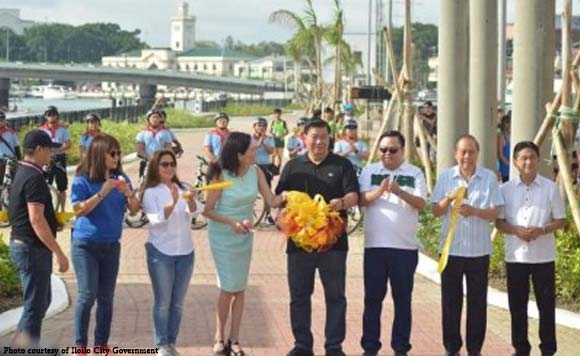 0 1,200
Share
Want more POLITIKO News? Get the latest newsfeed here. We publish dozens and dozens of politics-only news stories every hour. Click here to get to know more about your politiko - from trivial to crucial. it's our commitment to tell their stories. We follow your favorite POLITIKO like they are rockstars. If you are the politiko, always remember, your side is always our story. Read more. Find out more. Get the latest news here before it spreads on social media. Follow and bookmark this link. https://goo.gl/SvY8Kr

ILOILO CITY — The Iloilo River Esplanade in this city opened to the public its four new sections last Saturday.

Senator Franklin Drilon, the brain behind the linear park, led the inauguration at Muelle Loney St. in this city.

The four new sections stretch from the Iloilo Bridge or the Diversion Bridge to Muelle Loney, overlooking the Iloilo river.

The Iloilo River Esplanade is 8.1 kilometers in length. The first phase, which covers 1.2 kilometers from Sen. Benigno Aquino Jr. Ave. to Carpenter’s Bridge in Mandurriao district, was launched in August 2012.

In an interview Friday afternoon, Drilon said that the Iloilo River Esplanade has become a magnet for tourists in this city. “This has become a tourist attraction. Iloilo City has been identified as a liveable city, among others, because of this beautiful esplanade project that we had,” he said.

Drilon said other cities were also trying to replicate the Iloilo River Esplanade. “I read in the papers that Bacolod has put up one,” he said.

Senator Risa Hontiveros, one of the guests during the inauguration, lauded the city for creating “safe public spaces.”

She said the Iloilo River Espalanade was an “inspiration” to push for projects that make life “more pleasurable.”

“It is a beautiful space to have fun, stroll with family and friends,” she said.

Department of Public Works and Highways (DPWH) 6 (Western Visayas) Director Lea Delfinado said the Esplanade is a model of stability between development and the preservation of the environment.

Since the project began in 2010, she said the DPWH had a budget of P1.07 billion as part of the Iloilo flood control project.

Drilon has discouraged vandalism and told Ilonggos to take care of public structures.

“We have to have maintenance work but we appeal to the Ilonggos to take care of this. I urged the city police to be more vigilant in arresting people who commit vandalism,” he said.