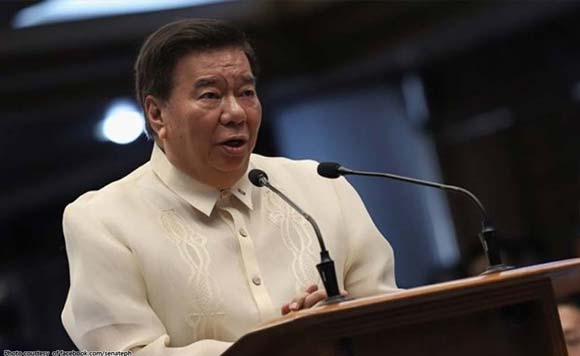 0 15
Share
Want more POLITIKO News? Get the latest newsfeed here. We publish dozens and dozens of politics-only news stories every hour. Click here to get to know more about your politiko - from trivial to crucial. it's our commitment to tell their stories. We follow your favorite POLITIKO like they are rockstars. If you are the politiko, always remember, your side is always our story. Read more. Find out more. Get the latest news here before it spreads on social media. Follow and bookmark this link. https://goo.gl/SvY8Kr

Drilon expressed frustration over the slow pace of progress on the PGN bridge which would connect the three major islands in Western Visayas.

“This is very frustrating. We have been pushing for this project – all of us, the people of Panay, Guimaras, and Negros. But it is just like a business-as-usual for the DPWH,” the Ilonggo solon said.

“The proposed Panay-Guimaras-Negros bridge is a dream of the people of Region 6 that remains to be fulfilled. We hope to make it happen during this administration,” he added.

During a Senate hearing on the agency’s proposed 2021 budget, Public Works Secretary Mark Villar said the PGN bridge is a “worthwhile project” and vowed to do “as fast as they can” to start its construction.

Meanwhile, Undersecretary Emil Sadain said the 32-kilometer bridge is still among the priorities of the agency.

The review of the feasibility study by the Export-Import Bank of Korea (Korean Eximbank) will be completed by the end of November, added Sadain.

The 32-km PGN bridge is composed of two phases: the Panay-Guimaras bridge which totals 13 kilometers and the Guimaras-Negros at 19.37 kilometers.

Before his term ends in 2022, Drilon said he wants to see the realization of the dream of the people of Region 6 to have the PGN bridge constructed to enhance inter-connectivity and boost commerce and trade in the region.

Continue Reading
Department of Public Works and HighwayFranklin DrilonPanay-Guimaras-NegrosSenate Minority Leader
0 15
Share
Politiko would love to hear your views on this...
More Stories