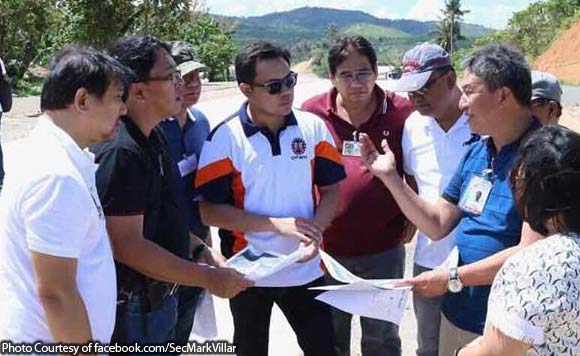 0 670
Share
Want more POLITIKO News? Get the latest newsfeed here. We publish dozens and dozens of politics-only news stories every hour. Click here to get to know more about your politiko - from trivial to crucial. it's our commitment to tell their stories. We follow your favorite POLITIKO like they are rockstars. If you are the politiko, always remember, your side is always our story. Read more. Find out more. Get the latest news here before it spreads on social media. Follow and bookmark this link. https://goo.gl/SvY8Kr

The Department of Public Works and Highways (DPWH) will complete the entire 5.2-km. Boracay Circumferential Road and build better drainage in the island during its six-month closure and rehabilitation.

“We have six months to restore the beauty of Boracay. For this period, we aim to complete the whole Boracay Circumferential Road that will strictly follow the 6.10-meter carriageway standard and road right-of-way on both sides as we also plan to build sidewalks and bike lanes for the pedestrians,” Public Works Secretary Mark Villar said in a statement issued Friday.

Villar said the project, which has a P490-million budget, has three sections to construct the gaps of the major thoroughfare and the initial steps to be taken will include the demolition of structures that occupy the 12-meter government road right-of-way, and the cleaning and declogging of the existing drainage lines along the circumferential road.

The public works chief personally led the team of DPWH maintenance personnel on Thursday, the first day of rehabilitation being implemented in coordination with other government agencies, such as the departments of environment and tourism.

Boracay has been saddled with narrow roads due to road right-of-way violations, with structures closely built along national roads, resulting in carriageways being shared by vehicles, pedestrians, and merchants.

An improved drainage and sewerage system would also be incorporated along the main road to contain in-land flooding and unabated waste discharge to the beach.

President Rodrigo R. Duterte has ordered the temporary closure of Boracay for the purpose of rehabilitating the island.