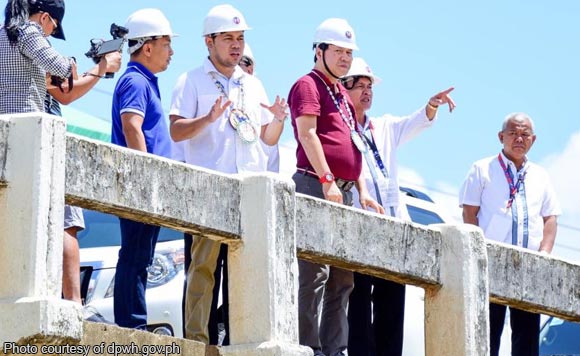 The Department of Public Works and Highways (DPWH) will start before yearend its work to replace a bridge damaged by Tropical Storm Urduja in 2017.

Expected to start this year is work on the construction of the replacement for Caray-Caray Bridge in Biliran, the DPWH said.

“As per Secretary Villar, this is a priority project for implementation within the year as Caray-Caray Bridge is the shortest access from Biliran going in and out to mainland of Leyte,” Tabacon said.

Caray-Caray Bridge became impassable to all types of vehicles last Dec. 16, after heavy rain from Urduja washed out and scoured bridge approaches.

At present, only light vehicles can used the damaged Caray-Caray Bridge, after the DPWH Biliran District Engineering Office made temporary fixes to the bridge.

But heavy vehicles have to take the alternate long route of Naval-Almeria-Kawayan-Culaba-Caibiran-Cabucgayan Road, which is about 90 km compared to the 19 km when crossing the Caray-Caray River.

Meanwhile, the DPWH will also build a temporary detour bridge for heavy vehicles before the total replacement of Caray-Caray Bridge is completed.

The DPWH estimated this will reduce travel time of heavy vehicles coming from Biliran to Naval from two-and-a-half hours to just 30 minutes.