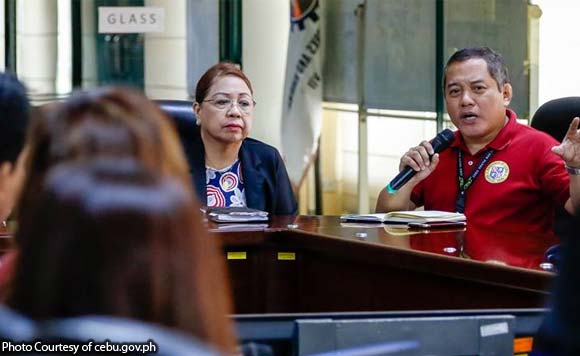 0 500
Share
Want more POLITIKO News? Get the latest newsfeed here. We publish dozens and dozens of politics-only news stories every hour. Click here to get to know more about your politiko - from trivial to crucial. it's our commitment to tell their stories. We follow your favorite POLITIKO like they are rockstars. If you are the politiko, always remember, your side is always our story. Read more. Find out more. Get the latest news here before it spreads on social media. Follow and bookmark this link. https://goo.gl/SvY8Kr

Cebu provincial officials admitted this after meeting with representatives from the Department of Public Works and Highways and local government units.

“A traffic management plan is needed in every road construction,” Tumulak said.

Represented at the meeting at the DPWH-7 office in Cebu City were officials and representatives of Consolacion, Liloan and Mandaue City.

At the meeting, the local officials cited the road widening project of the DPWH in Tayud, Consolacion as the cause of the traffic problem, including road accidents.

Tumulak suggested that the management units of Mandaue, Consolacion and Liloan draw up a traffic management plan, and map out alternative routes.

Work on the P55.551-million, 1-km road widening project in Tayud, Consolacion should have been completed last Jan. 10 but only 18.93 percent of the roadworks had been accomplished.

Tayud Road connects to Cansaga Bridge, and is the alternative route for the commuters coming to and from northern Cebu.

Project Engineer Roy Dela Cruz said the road widening was suspended because of the problem of road-right-of-way, the trees to be cut and the location of the drainage’s outfall.

Meanwhile, Consolacion Mayor Teresa Alegado requested the DPWH to have a monthly meeting with her, the contractor and the affected structure owners.

The mayor said her constituents blamed the town government for the traffic woes caused by the road widening projects.

For his part, DPWH-7 Director Edgar Tabacon affirmed that proper coordination in every DPWH project is vital, and said the DPWH will be more prudent in choosing contractors.

Glenn Antigua, chief for operations of the Traffic Enforcement Agency of Mandaue (TEAM), said his office recorded at least 42,000 trips going to Consolacion from UN Ave. in Mandaue City for just 14 hours.

He cited the need for TEAM to have a boom truck to be dispatched during road accidents. Tabacon said the DPWH 7 will try to help Mandaue on this concern.