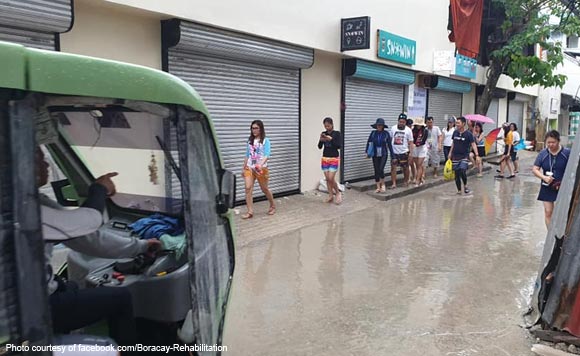 0 912
Share
Want more POLITIKO News? Get the latest newsfeed here. We publish dozens and dozens of politics-only news stories every hour. Click here to get to know more about your politiko - from trivial to crucial. it's our commitment to tell their stories. We follow your favorite POLITIKO like they are rockstars. If you are the politiko, always remember, your side is always our story. Read more. Find out more. Get the latest news here before it spreads on social media. Follow and bookmark this link. https://goo.gl/SvY8Kr

ILOILO CITY — The Municipal Disaster Risk Reduction and Management Office (MDRRMO) of Malay, Aklan on Thursday appealed to the public to bear with the flooding in the world-famous Boracay Island.

Boracay was flooded on Wednesday following the heavy rains brought about by Tropical Storm Falcon and was seen also due to an ongoing drainage project of the Department of Public Works and High Ways (DPWH), said Catherine Ong, MDRRM officer of Malay, in a phone interview.

“Boracay experiences flooding because of the ongoing rehabilitation program of the DPWH. We are asking the public to bear with us,” Ong said.

The drainage project of the DPWH is currently on its second phase and is at about 40 percent of its completion, she said.

The project is pegged to be finished in the middle of 2020, she said. “We anticipate the occurrence of flooding,” she admitted.

The villages of Manoc-Manoc and Balabag experienced flooding from 9 a.m. to 4 p.m.

“The floodwater was on its peak at around 2 p.m. to 4 p.m. when it was about three feet. It reached three feet because we were on red warning or have experienced very heavy rainfall,” Ong said.

The flooding was resolved through the use of the DPWH’s water pump. Ong said the water was poured in an open space where it flowed to drainage canals.

She assured that the MDRR council has convened and planned temporary flood solutions even before the Philippine Atmospheric, Geophysical and Astronomical Services Administration (PAGASA) announced the start of the rainy season.

The water pumps of the Boracay’s water system and DPWH are put on standby for possible reoccurrence of flooding.

“We have prepared all the resources. We assure that our volunteers and DRRM officers are ready to assist the public to pass by the flooded road. When the road is impassable, we have already planned an alternate route,” she guaranteed.

The MDRRMC is currently on its post-disaster assessment and awaits reports from Barangay DRRM. (PNA)