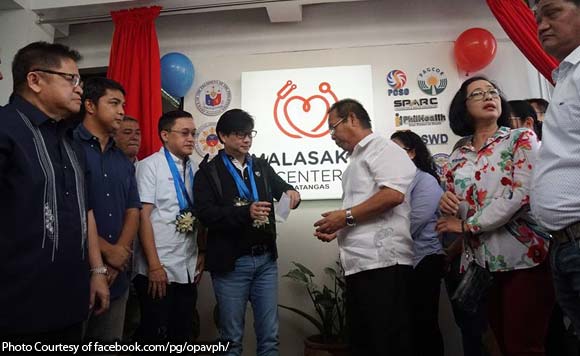 The pilot, not Presidential Assistant for the Visayas Secretary Michael Dino, is to blame for making a helicopter land at the Philsports Arena (formerly Ultra Stadium) in Pasig City, Malacañang said Thursday.

Presidential Spokesperson Salvador Panelo made this remark after a photo of Dino getting off the helicopter went viral on social media on Tuesday.

A certain Newsph.org, on its Facebook post, claimed that the helicopter disturbed a “Department of Education event” in the stadium.

Panelo said the pilot, who might not have known that there was an ongoing game, should have communicated with authorities if the ground was clear.

“I think the pilot didn’t know that there was a game going on. That’s the fault of the pilot, not the passenger,” Panelo said in a Palace briefing.

“If he landed there when there was an ongoing game, e maiistorbo nga. Dapat yun nagko-communicate kung clear ba yung ground (they would really be disturbed. He should have communicated first if the ground was clear),” he added.

Panelo defended Dino from criticism, noting that he only looked for a restroom because they were waiting for someone, whom he did not identify, to pick up.

Earlier, Office of the Presidential Assistant for the Visayas (OPAV) spokesperson Assistant Secretary Anthony Gerard Gonzales said Dino “took his only chance to go to the restroom before their onward destination” while waiting for others to board the helicopter.

Panelo said Dino could have only appeared to have abused his power as government official because he was there at the time and being in public office made him open to criticisms.

He, however, said if proven that Dino knew about the ongoing event in the stadium, he could be held accountable as an official.

”Kung alam niya na merong game, mali siya as an official. Pero kung di naman niya alam, kung pasahero ka lang (If he knew there was a game, he’s wrong as an official. But if he didn’t know, if he’s just a passenger then it’s not his fault),” Panelo said.

According to Gonzales, Dino was on his way to lead the launching of Malasakit Center in Batangas. (PNA)