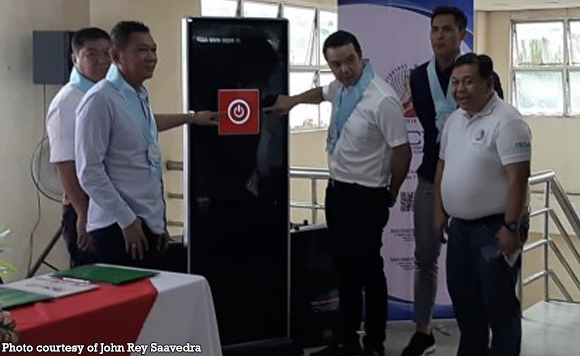 The Department of Information and Communications Technology (DICT) on Monday launched its “Free Wi-Fi For All” project at the Ramos Public Market here.

“Today, here in the queen city of the south, we are starting the Digital Hub in collaboration with Cebu Innovation Council. The vision is to make the hub as the primary birthplace of innovative ideas, products of research and development programs, successful startups, like the working space, internet, and mentoring,” said Felino Castro V, DICT Undersecretary for National Broadband Plan Backbone and Free Wi-Fi Internet Access in Public Places, in his message.

Castro was joined by City Councilors Eduardo Rama Jr., Donaldo Hontiveros and Jerry Guardo, during the ceremonial switching on of the digital hub, marking the start of the free internet access within the vicinity of the Ramos Public Market in the central village of Cogon-Ramos in this city.

According to Castro, the innovation hub will empower “even the poor with big ideas (to) become the next success story in the tech world”.

“With the formation of the innovation hub, Cebu will not only be known as the Queen City of the South but also, hopefully, the Center of Innovation in the South,” Castro added.

As the hub is situated at the Cebu City Department of Manpower Development and Placement (DMDP) that manages technical-vocation trainings for the city residents, trainors and trainees here will have “a conducive working environment, free internet connectivity, regular knowledge-sharing session, boot camp, pitching session, and business development,” he said.

Castro also noted the need of innovators to have fast internet access to prepare them for the “next frontier where big data, IoT (internet of things), AI (artificial intelligence), are influencing our lifestyle”.

He said the DICT is pushing for improved connectivity in the country through the National Broadband Program promoting the campaign “to reach the unreachable.” The Free Wi-Fi for All program, he said, ensures the people that they can fully utilize the said program, he added.

“It is my fervent hope that after this noble initiative, all of us will stay connected and work together to come up with a plan and action on how to better improve our services to better serve the Filipino people, (through the) DICT of the people and for the people,” Castro said.

Rama, who represented Mayor Edgardo Labella, in his message said the launching of the digital hub and innovation center here “is a step to a right direction” now that Cebu lost the grip of being the furniture hub before which was then replaced as BPO (business process outsourcing) hub a decade ago.

The city councilor thanked the DICT for providing the city residents with the opportunity to embrace the era of connectivity.

He also thanked Labella for allowing the project to push through in the city.

Paulo Uy, president of Cebu Innovation Council, said the hub will provide a level playing field even to poor residents who do not have money to pay for internet connection and to arouse ideas from innovators, especially the startups.

Castro also turned over 10 desktop computers to DMDP, to bolster the innovation center situated at the second level of the Ramos Public Market. (PNA)