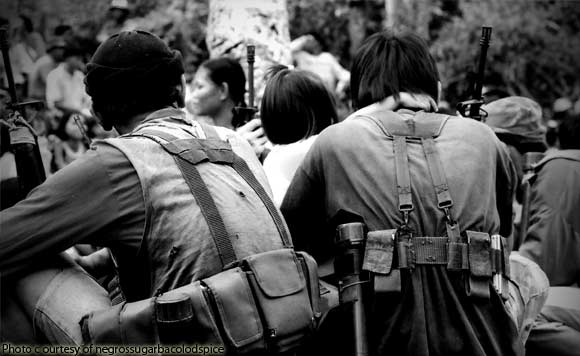 But this time, the NPAs were not quite successful in Leon town as the tanods at the detachment fought back and managed to repel them.

Authorities said barangay tanod Romeo Cabalong was wounded on his shoulder during the firefight. Some residents reported seeing at least two wounded rebels.

The tanods, armed with shotguns and M14 rifles, fended off the NPAs in a 20-minute firefight until the Army’s 61st Infantry Battalion, PNP Regional Public Safety Battalion 6 and the Special Action Force arrived.

At the time, the Army and PNP members were pursuing the Maasin raiders.

Police believe the NPAs in Tuesday’s attack were the same ones involved in the raid on the Maasin police station last June 18.

Following the encounter, residents in the hinterland barangays of Leon and Alimodian were told to remain on alert and stay inside their homes.

Stuents at the Lampaya elementary school were secured and classes were suspended.