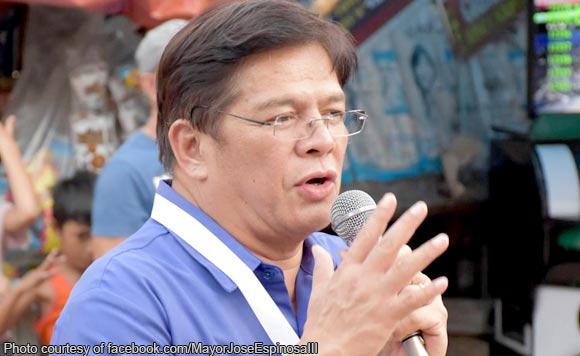 0 707
Share
Want more POLITIKO News? Get the latest newsfeed here. We publish dozens and dozens of politics-only news stories every hour. Click here to get to know more about your politiko - from trivial to crucial. it's our commitment to tell their stories. We follow your favorite POLITIKO like they are rockstars. If you are the politiko, always remember, your side is always our story. Read more. Find out more. Get the latest news here before it spreads on social media. Follow and bookmark this link. https://goo.gl/SvY8Kr

With the 2019 local elections looming, Iloilo City Mayor Jose Espinosa III is open to the idea of a coalition with other political groups.

Espinosa, who replaced Jed Mabilog as city mayor late last year, is running for another term as mayor in the midterm elections.

“If you have a good platform, why not? I am open to all,” Espinosa said of the possibility of entering into a coalition (https://thedailyguardian.net/local-news/joe-iii-open-to-coalition/).

Those running for posts in the 2019 elections will have until October to file their certificates of candidacy.

Earlier, the group of Councilor Joshua Alim said they are open to forming a coalition with Espinosa.

But while Alim is running for Congress, his mayoral candidate is Dr. Pacita Gonzalez, widow of former justice secretary Raul Gonzalez Sr.

On the other hand, Councilor Plaridel Nava plans to run as vice mayor but is willing to step aside if Espinosa accepts their offer for a coalition.

Meanwhile, Espinosa also said he got offers from other groups. He said he will bare his final slate before the filing of COCs on Oct. 1 to 5.

“My slate will include both former and incumbent city officials,” he said.