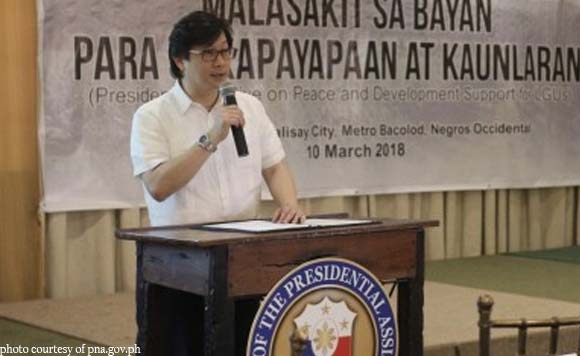 0 1,689
Share
Want more POLITIKO News? Get the latest newsfeed here. We publish dozens and dozens of politics-only news stories every hour. Click here to get to know more about your politiko - from trivial to crucial. it's our commitment to tell their stories. We follow your favorite POLITIKO like they are rockstars. If you are the politiko, always remember, your side is always our story. Read more. Find out more. Get the latest news here before it spreads on social media. Follow and bookmark this link. https://goo.gl/SvY8Kr

CEBU CITY — The top presidential aide for the Visayas on Wednesday expressed full support to the revival of the proposal to grant President Rodrigo Duterte emergency powers to solve the traffic problem in Metro Manila, and other big cities like Metro Cebu.

Secretary Michael Lloyd Dino, the presidential assistant for the Visayas, said Department of Transportation Secretary Arthur Tugade’s proposal to give Duterte emergency powers to solve road congestion in the remaining three years of his term is backed with facts and realities.

Dino wanted Metro Cebu to be included in the scope of the presidential emergency powers, saying that the metropolis has been “experiencing traffic congestion due to lack of mass transport system and narrow roads not having been widened for so many years.”

According to him, unresolved traffic problem in Metro Cebu has caused at least PHP1.1 billion in economic losses a day.

“I am confident that our lawmakers will look into Sec. Tugade’s proposal. Lawmakers who frequent Metro Manila to attend to their official functions have also experienced being stuck in traffic in Metro Cebu,” Dino told the Philippine News Agency (PNA) in an interview.

The chief of the Office of the Presidential Assistant for the Visayas (OPAV) recalled having proposed to include Metro Cebu when Tugade pushed for the emergency powers, on the sidelines of the presentation of 10-point socio-economic agenda of the Duterte administration at the SMX Convention Center in Lanang, Davao City, on June 21, 2016.

Duterte’s aide for the Visayas recalled having attended several public hearings by the House of Representatives Committee on Transportation, headed by Rep. Cesar Sarmiento of Catanduanes Lone District, and pitched in strategies on how to solve the traffic problems in Metro Cebu.

“It has long been recognized that Metro Cebu’s traffic is brought about by lack of efficient mass transport system and overcapacity of our existing roads,” he said, stressing that “while the crisis is still manageable, we need to act now”.

Dino said Tugade has offered Metro Cebu a “basket of solutions” to solve the traffic woes.

“The Cebuanos believe that such emergency powers will hasten the implementation of infrastructure projects aimed to add more capacity on our existing roads and the mass transport backbone which is the Light Rail Transit (LRT),” he noted.

The presidential assistant said he already conducted a series of consultation with the local government units (LGUs) in Cebu, the business community, and the regional executives from transportation-related agencies of government to ferret out more ideas on how to solve the woes on Metro Cebu’s thoroughfares.

Last Monday, Tugade said that he will leave it up to the new batch of senators the wisdom of allowing Duterte to exercise emergency powers to solve the traffic congestion in Metro Manila.

Tugade said he had already submitted all the necessary documents to Congress. (PNA)