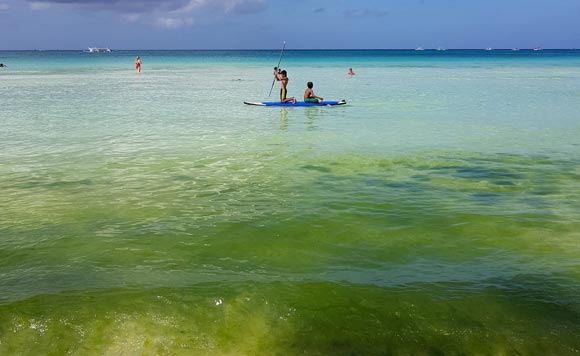 0 616
Share
Want more POLITIKO News? Get the latest newsfeed here. We publish dozens and dozens of politics-only news stories every hour. Click here to get to know more about your politiko - from trivial to crucial. it's our commitment to tell their stories. We follow your favorite POLITIKO like they are rockstars. If you are the politiko, always remember, your side is always our story. Read more. Find out more. Get the latest news here before it spreads on social media. Follow and bookmark this link. https://goo.gl/SvY8Kr

With some two months to go before Boracay Island is reopened to tourists, its groundwater remains polluted, the Environmental Management Bureau lamented.

However, the EMB-6 – an agency under the Department of Environment and Natural Resources – said the coliform level in the groundwater has gone down.

“(T)he good thing is that it has reduced during the rehabilitation period,” EMB-6 legal chief Ramar Niel Pascua said (https://thedailyguardian.net/local-news/boracay-groundwater-still-polluted-emb/).

He said the coliform level in three barangays of Boracay as of June 2018 is still above the standard of 100 most probable number (MPN) per 100 milliliters (ml).

Barangay Yapak posted roughly 400MPN per 100ml while Manoc-Manoc and Balabag have more than 1,000MPN per 100 ml each.

Coliform bacteria, which are present in the environment and in the feces of warm-blooded animals and humans, is not likely to cause illness but may indicate disease-causing organisms in the water system.

Pascua said groundwater contamination has been a problem long besetting the island, which was closed last April 26 for environmental rehabilitation.

In 2001, the National Water Resources Board issued a moratorium on groundwater extraction in the island by banning the drilling and digging of new wells.

Human wastes from wetlands also contribute to the contamination of groundwater through seepage.

The DENR sought the help of the Department of Health to address the problem of high coliform levels.