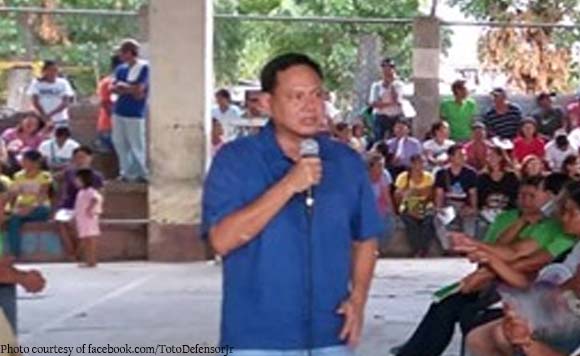 0 583
Share
Want more POLITIKO News? Get the latest newsfeed here. We publish dozens and dozens of politics-only news stories every hour. Click here to get to know more about your politiko - from trivial to crucial. it's our commitment to tell their stories. We follow your favorite POLITIKO like they are rockstars. If you are the politiko, always remember, your side is always our story. Read more. Find out more. Get the latest news here before it spreads on social media. Follow and bookmark this link. https://goo.gl/SvY8Kr

Iloilo Governor Arthur Defensor Jr. has asked the Department of Public Works and Highways (DPWH) to provide him a map of Iloilo roads, part of an effort to convert provincial roads into national thoroughfares.

“We have provincial roads that were concreted from national government program so it is better to turn-over the ownership to them for maintenance aspect,” Defensor said Thursday.

The governor believes the national government can take over the roads citing the availability of funds under the Duterte administration’s “Build, Build, Build” infrastructure program.

The map of Iloilo’s roads will also identify which were already concreted and its respective project implementers.

“We want to work with them together on which of our provincial roads that were already concreted, and on what was done by the DPWH and the province. Coordinated implementation on road projects will allow the province to properly allot its budget,” Defensor said.