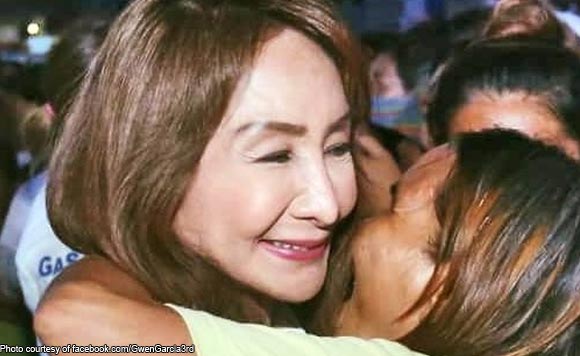 0 589
Share
Want more POLITIKO News? Get the latest newsfeed here. We publish dozens and dozens of politics-only news stories every hour. Click here to get to know more about your politiko - from trivial to crucial. it's our commitment to tell their stories. We follow your favorite POLITIKO like they are rockstars. If you are the politiko, always remember, your side is always our story. Read more. Find out more. Get the latest news here before it spreads on social media. Follow and bookmark this link. https://goo.gl/SvY8Kr

Defective Secure Digital (SD) cards used in last Monday’s mid-term elections have stalled the proclamation of the winning candidates for governor and vice governor in the province of Cebu.

Third District Rep. Gwendolyn Garcia who leads the gubernatorial race with a lead of 235,000 votes over her rival, Vice Governor Agnes Magpale, patiently waits for the all the canvassed votes to be consolidated before she can proclaimed winner.

Lawyer Jerome Brillantes, supervisor of the Commission on Elections (Comelec)-Cebu, said that Board of Elections Inspectors in some clustered precincts failed to transmit their election returns to the Provincial Board of Canvassers (PBOC) on time.

Brillantes called for recess of the PBOC on Wednesday morning while waiting for the election result from Toledo City where BEIs reported malfunctioning of SD cards.

On Tuesday, the PBOC waited for the election results of Toledo and Ronda, but only those of the latter arrived late at night.

According to Brillantes, the issue on defective SD cards in Ronda and Toledo was resolved Tuesday.

However, Toledo’s malfunctioning SD cards were resolved late and the BEIs were authorized to proceed in batch-feeding of votes to the vote counting machines (VCMs) on Wednesday.

“Yes we have resolved the issue on malfunctioning SD cards. Okay na (They are okay). But the BEIs need to batch-feed the ballots so that the VCMs (vote counting machine) can read and register the votes,” Brillantes explained in an interview with the Philippine News Agency (PNA).

The chair of PBOC assured that election returns from Toledo will be relayed once the batch-feeding of the ballots is done.

Although the election results could already indicate the winning bets for governor and vice governor, “it is best to wait for the last remaining vote to be counted and consolidated before we can proclaim who win the election,” Brillantes said.

Garcia, also a former governor for three terms until 2010, declined Tuesday, May 14, to be proclaimed in spite of her huge margin over Magpale and the votes to be accounted for were only 132,000.

“I would rather respect the official canvassing process and we will just wait until every vote has been counted,” she said.

On the other hand, incumbent Governor Hilario Davide Jr., who is leading in the vice gubernatorial race, might be proclaimed together with Garcia once the canvassing is completed.

Brillantes expected that the votes from Toledo would be relayed Wednesday evening.

“Proclamation will follow either tonight (Wednesday, May 15) or tomorrow (Thursday, May 16) morning,” Brillantes said.