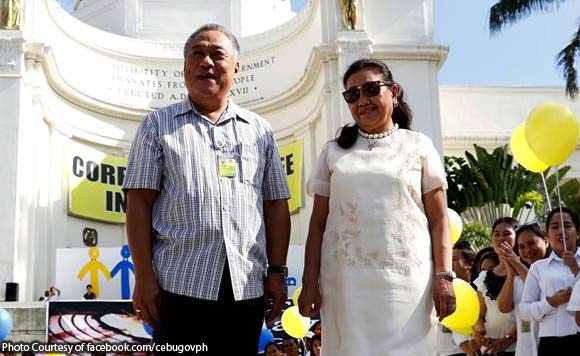 0 1,624
Share
Want more POLITIKO News? Get the latest newsfeed here. We publish dozens and dozens of politics-only news stories every hour. Click here to get to know more about your politiko - from trivial to crucial. it's our commitment to tell their stories. We follow your favorite POLITIKO like they are rockstars. If you are the politiko, always remember, your side is always our story. Read more. Find out more. Get the latest news here before it spreads on social media. Follow and bookmark this link. https://goo.gl/SvY8Kr

Cebu Governor Hilario Davide III and Vice Governor Agnes Magpale are facing criminal and administrative charges for alleged illegal appointments before the Office of the Ombudsman.

Cebu Daily News reported that Rep. Gwendolyn Garcia (3rd district) charged both officials for allegedly filling the positions of provincial health officer 1 and provincial budget officer even if the posts were not yet vacant.

“In this case, respondents’ acts of illegal appointments not only violate the norms of public accountability and diminishes the integrity of their public office, but also violate the security of tenure of the rightful occupants of the offices involved, hence constituting conduct prejudicial to the best interests of the service,” a portion of Garcia’s complaint read.

In her complaint, Garcia said that Catan’s and Rodas’ posts were not yet vacant at that time as department heads Cristina Giango and Emme Gingoyon were still appealing their dismissal.

In November 2015, the Ombudsman dismissed Giango and Gingoyon from service for grave misconduct and gross neglect of duty as members of the Bids and Awards Committee.

Their dismissal stemmed from a case in relation to the construction of the Cebu International Convention Center during the Garcia administration.

While Giango and Gingoyon sought recourse from the Court of Appeals (CA), Davide declared their positions vacant and appointed Rodas on May 31, 2016 as provincial budget officer and Catan on August 22, 2017 as provincial health officer II.

Tolentino and Nacorda reportedly facilitated and signed the appointment documents, which the Provincial Board headed by Magpale approved and ratified.

In July 2017, the CA ruled that Giango and Gingoyon were guilty only of simple misconduct and suspended them only for three months without pay.

Garcia said that Davide reassigned Giango to the Medical Clinic Unit of the Provincial Health Office, and recalled Catan’s designation in February 2018, but later reappointed him as provincial health officer,

It was however not clear if Gingoyan was reinstated to his position as budget officer.

“The positions of provincial health officer II and provincial budget officer were not yet vacant, yet respondents Davide took it upon himself to appoint respondents Rodas and Catan to said positions, who thereafter exercised the functions of said offices, and enjoyed the salaries, benefits, and emoluments appurtenant thereto,” Garcia said.