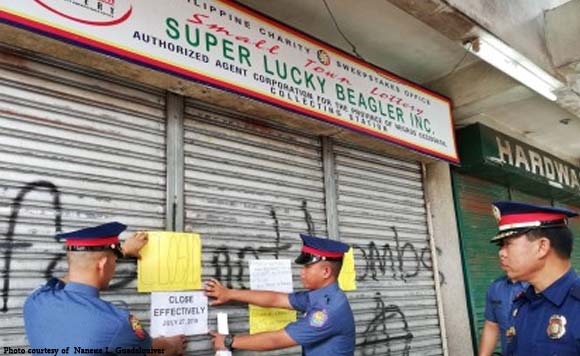 0 303
Share
Want more POLITIKO News? Get the latest newsfeed here. We publish dozens and dozens of politics-only news stories every hour. Click here to get to know more about your politiko - from trivial to crucial. it's our commitment to tell their stories. We follow your favorite POLITIKO like they are rockstars. If you are the politiko, always remember, your side is always our story. Read more. Find out more. Get the latest news here before it spreads on social media. Follow and bookmark this link. https://goo.gl/SvY8Kr

BACOLOD CITY — Police authorities in Negros Occidental and Bacolod City shut down all outlets of Small Town Lottery, Lotto, and other gaming schemes under the Philippine Charity Sweepstakes Office (PCSO) on Saturday morning.

The move came after President Rodrigo R. Duterte on Friday night ordered the closure of these entities nationwide because of massive corruption.

“Those that will continue their operation will be apprehended,” he added.

Maj. Rollie Pondevilla, chief of the Silay City Police Station, said that after receiving the order from the higher headquarters, he led his personnel in the closure of all STL and Lotto outlets in the northern Negros city.

Among these is the collecting station of Super Lucky Beagler, Inc., the PCSO authorized agent for Small Town Lottery in Negros Occidental.

Policemen posted on the closed steel door an announcement that the station has been closed effective Saturday, and will continue as such until further notice.

Personnel of Police Station 1 closed down at least three Lotto outlets in its jurisdiction.

Biñas said that after receiving the order, he directed the station commanders to carry out the closure order, although some betting station operators just voluntarily closed their outlets.

He added that there are indeed anomalies in the operations of certain STL outlets, based on his experience in enforcing the law related to it.

In his order, Duterte directed that all licenses, concessionaires, and franchises issued by the PCSO recalled, canceled, and withdrawn, effective immediately.

All law enforcers were told to implement his directives with dispatch and without exception. (PNA)