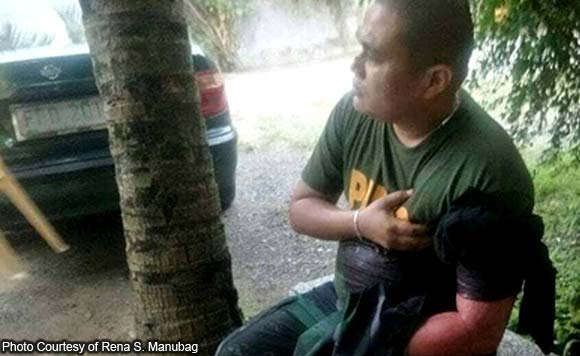 0 496
Share
Want more POLITIKO News? Get the latest newsfeed here. We publish dozens and dozens of politics-only news stories every hour. Click here to get to know more about your politiko - from trivial to crucial. it's our commitment to tell their stories. We follow your favorite POLITIKO like they are rockstars. If you are the politiko, always remember, your side is always our story. Read more. Find out more. Get the latest news here before it spreads on social media. Follow and bookmark this link. https://goo.gl/SvY8Kr

An Iloilo policeman who survived an ambush last year may not survive getting kicked out of the police force.

Bulalacao said Acap faces summary dismissal proceedings after he failed to report to duty after his leave of absence ended last Nov. 1.

He added Acap, who has been charged for grave neglect of duty for being AWOL, has not returned to work “despite several notices sent to him.”

Bulalacao said they have yet to determine Acap’s whereabouts, with some saying he went abroad and others saying he is in Metro Manila.

For now, the police have coordinated with the Bureau of Immigration to determine if Acap went abroad.

Acap, 38, has been in the PNP service for 12 years. He filed for a leave of absence thrice after being hospitalized after surviving an ambush last June 26.

PO2 Melvin Mocorro, a member of the Police Regional Office – Autonomous Region in Muslim Mindanao, was arrested on June 28 for his alleged involvement in the ambush.