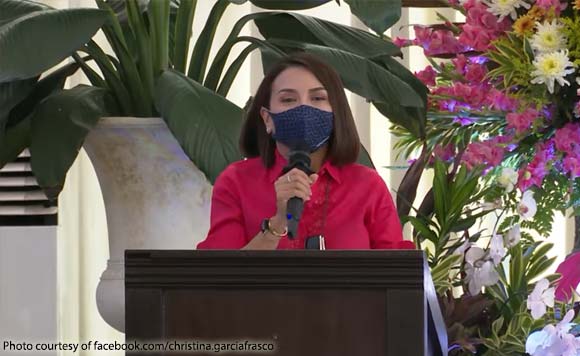 0 510
Share
Want more POLITIKO News? Get the latest newsfeed here. We publish dozens and dozens of politics-only news stories every hour. Click here to get to know more about your politiko - from trivial to crucial. it's our commitment to tell their stories. We follow your favorite POLITIKO like they are rockstars. If you are the politiko, always remember, your side is always our story. Read more. Find out more. Get the latest news here before it spreads on social media. Follow and bookmark this link. https://goo.gl/SvY8Kr

Gwendolyn Garcia really put her life for the service of Cebuanos.

Her daughter Liloan Mayor Christina Garcia-Frasco shared just how dedicated her mom is to running the province as governor, even having taken detours in her personal dreams just to serve the people.

“The year was 2001. After twenty or so years of building a life and raising three kids, Gwendolyn Garcia finally decided to pursue her lifelong dream of becoming a lawyer,” Frasco said. “She was called to the path of public service. She became consultant to the Governor of Cebu, my grandfather, Pabling Garcia. And two years later, the path to the Governorship came about.”

“I remember distinctly a dinner that we had had in Rockwell when she told me that she would be running for Governor. At that time, I could not understand her decision. And in fact, I questioned it… Her reply to me then was very simple: For Cebu.”

That started the crazy but fulfilling life in politics.

“Her last term was interrupted by an illegal suspension. But even then, facing the powers that be of a national government that slapped its firm hand across the people’s will in Cebu, she stood firm,” she added.

“Happy Birthday to the greatest of Cebu’s champions. There is no better leader for Cebu than you. Happy Birthday, Mom!”

Ann Tan catches up with gal pals over dinner