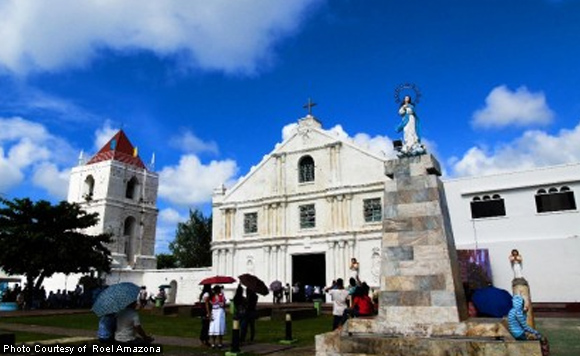 0 1,281
Share
Want more POLITIKO News? Get the latest newsfeed here. We publish dozens and dozens of politics-only news stories every hour. Click here to get to know more about your politiko - from trivial to crucial. it's our commitment to tell their stories. We follow your favorite POLITIKO like they are rockstars. If you are the politiko, always remember, your side is always our story. Read more. Find out more. Get the latest news here before it spreads on social media. Follow and bookmark this link. https://goo.gl/SvY8Kr

GUIUAN, Eastern Samar — The century-old church in this town destroyed by Super Typhoon Yolanda was rededicated on Sunday through a mass led by Papal Nuncio to the Philippines Archbishop Gabriele Giordano Caccia.

The ecclesiastical diplomat described the restoration efforts for the Roman Catholic’s Our Lady of the Immaculate Conception Parish Church as a miracle after the structure was ruined by the super typhoon’s powerful winds and storm surges when it made landfall on November 8, 2013.

“When the church was destroyed, maybe few of you were thinking that it would be impossible for the church to build back, but in fact, it is now back, strong, and solid,” Caccia said.

In 2016, the National Museum of the Philippines (NMP) allocated PHP112 million to rebuild the church. It was augmented with USD300,000 donations from the United States government through the Ambassador’s Fund for Cultural Preservation.

The restoration of the 18th-century Baroque-style Marian church famous for its extensive shell ornamentation is very important to the history of the Roman Catholic faith that is preparing for the celebration of the 500 years of Christianity in the Philippines.

“This is also good because it shows the possibility that the church and state can work together, to preserve this heritage,” Caccia added.

The papal nuncio recalled that in 2007, the Vatican and the Philippine government signed an agreement recognizing that the cultural heritage of the Catholic Church in the Philippines constitutes a very significant part of the cultural patrimony of the nation.

“This kind of cooperation has been possible because of this agreement,” Caccia added. “This is a sign that if we work hand-in-hand miracle does happen — an encouragement to continue in this way,” he added.

Ana Mariel Teresa Labrador, National Museum assistant director said that it was a great privilege for their agency to lead the restoration, “which in actual fact is a highly complex program of numerous activities, which arguably unprecedented in this country.”

“The outcome feasible now for all to see is a church once again intact and whole, reconstructed according to the traditional methods and where this is not possible in a way sensitive to heritage conservation,” Labrador said.

“The first priority is the preservation being facility was to enhance the structural resistance to future natural calamity for the safety and preservation of lives and in the legacy of faith that this church represents.

The tangible manifestation of its long history and outstanding artistry were painstakingly brought back to the best possible while remaining faithful to their perceived original design,” she added.

In the restoration process, the NMP collaborated with the Grimwade Centre for Cultural Materials Conservation of the University of Melbourne in the treatment of some of the movable heritage.

Local artists like Guy Custodio was commissioned to help in the wood fabrication, painting and gold leafing of the church’s ceiling and its main and side altars. Another local artist, Froilan Garabiles, worked on the restoration of shell ornaments.

“I’m very thankful and privileged to share my skills in the restoration,” said Garabiles, who recalled the challenging task of redecorating and looking for shells needed in the restoration. “The task was not easy, I am proud that my family was part of it,” he added.

Prior to the restoration work, the team from NMP carefully documented the church’s original altar, ceiling, elaborate carvings especially the door and building.

They also conducted a 3D scanning for reverse engineering to study the construction and the fabric weaknesses of the church even before Yolanda happened.