Cebuanos to teach Belgians how to party ‘Sinulog’-style–Mayor Osmeña 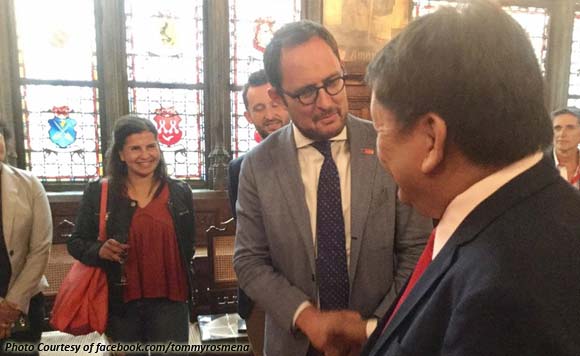 Residents of Kortrijk, Belgium will soon enjoy its very own “Sinulog”-style festival, and nobody less than Cebuanos will show them how it’s done.

Cebu City Mayor Tomas Osmeña made this reveal on a Facebook post which showed his visit to Kortrijk and meeting with Mayor and former Deputy Prime Minister Vincent Van Quickenborne. It turns out that Kortrijk and Cebu are sister cities.

According to him, Quickenborne has asked assistance from the local government of Cebu in setting up Kortrijk’s own version of the world famous Sinulog Festival.

“He will be sending a delegation to visit Cebu next year. Our Sinulog has impressed quite a few people from here,” Osmeña said, referring to the foreign politiko.

Also known as the Santo Niño Festival, the Sinulog is an annual cultural and religious festival held on the third Sunday of January in Cebu City. It attracts as much as two million revelers a year and is just about the Philippines’ version of Mardi Gras thanks to all its accompanying street parties.

“In exchange,” Osmeña noted, “we will have the opportunity to send some of our youth to Kortrijk to learn classical music and European history. A conductor will also be coming to Cebu to organize a symphony.”

Now that’s what you call give and take!