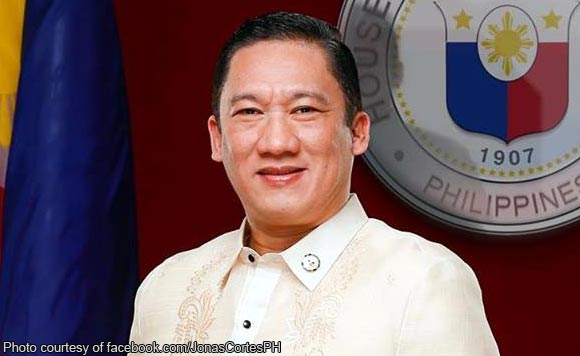 0 2,583
Share
Want more POLITIKO News? Get the latest newsfeed here. We publish dozens and dozens of politics-only news stories every hour. Click here to get to know more about your politiko - from trivial to crucial. it's our commitment to tell their stories. We follow your favorite POLITIKO like they are rockstars. If you are the politiko, always remember, your side is always our story. Read more. Find out more. Get the latest news here before it spreads on social media. Follow and bookmark this link. https://goo.gl/SvY8Kr

Cebu Rep. Jonas Cortes is facing a plunder complaint before the Office of the Ombudsman for approving the sale of a 3.5-hectare reclaimed government land for a measly P1.8 million when he was mayor of Mandaue City.

The complaint, filed by Mandaue City residents Abner Quiño and Emmanuel Espiritu, accused Cortes and four other former and incumbent government officials of conspiring to sell the property at a price disadvantageous to the government in 2015 in exchange for kickbacks.

The property whose sale was approved by Cortes and the city council was a 35,821-square meter reclaimed land located in Barangay Looc.

Documents showed that the city government, through then-mayor Demetrio Cortes, leased around 60,000 square meters of land to a certain Ernesto Ouano Sr. in 1978 for a period of 25 years at an annual rent of P150.

In 1990, the city government, through mayor Alfredo Ouano, entered into an amended contact of lease with Ouano Sr. for the property with an annual rate of P1,500 per hectare on

The contract was amended for the fourth time in 1995, with Ecodemcor, represented by Ouano Sr., leasing 35,851 square meters of land.

In 2001, the city, represented by then-mayor Thadeo Ouano, executed a Promise To Sell wherein Ouano Sr. was given
preference to buy the reclaimed land with an area of 35,821 square meters.

The Promise to Sell, however, has no legal and factual bases— and was therefore not binding— since Ouano did not obtain the Sangguniang Panlungsod’s approval for it.

The document also did not state that the property will be sold at P50 per square meter.

On August 24, 2015, Ecodemcor, through its president Olga Ouano informed then-mayor Cortes that it will exercise its right of first preference under the Promise To Sell at a price of P50 per square meter.

Despite knowing that the Promise to Sell cited by Olga was not binding to the city government, Cortez endorsed her offer to the Sangguniang Panlalawigan on August 25, 2015.

This was even if there was no determination if the property has been classified as alienable and disposable. No consultations were also made with the City Auditor or City Assessor for appraisal of the land.

Less than one month after Cortes forwarded the offer, the Sangguniang Panglungsod recommended the disposal of the reclaimed land to Ecodemcor at a price of P50 per square meter.

The sale was completed even without approval from the Commission on Audit, which was required by the Local
Government Code and COA rules.

Aside from plunder, the complaints said Cortes and the local government officials involved in the sale of land should also be held liable for graft, and administrative charges of grave misconduct and conduct prejudicial to the best interest of the service.