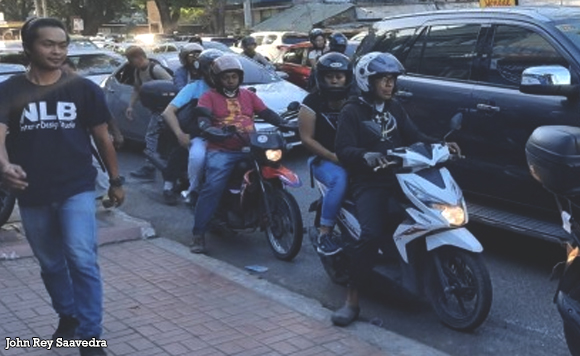 CEBU CITY – Local officials in two cities and a town in Cebu province on Friday appealed to the Department of Transportation (DOTr) to lift the ban against motorcycle back-riding.

Gullas was quoted in a statement from the Office of the Presidential Assistant for the Visayas (OPAV) as saying that from the start, his stand had been to allow motorcycle back-riding for spouses and members of the same family.

“I would like to appeal that back-riding for motorcycles because it is the main transportation in the city, especially for family members,” Gullas was quoted as saying in Cebuano.

When the community quarantine protocols began in Cebu last March, the DOTr announced the ban on motorcycle back-riding, even between family members, to avoid close contact which may cause transmission of coronavirus disease 2019 (Covid-19).

Gullas said, however, that he is hoping DOTr would look at the situation on the ground. “Hopefully, they can reconsider their position,” he said.

For his part, Apura said motorcycles have already become a means of public transportation which have been patronized by city folks.

There may be no harm in allowing a couple as driver and back-rider of a motorcycle, he said, adding that checkpoint personnel could ascertain if the back-rider is indeed the spouse of the driver by asking them to show proof.

He maintained that measures could be implemented to prevent the occurrence of traffic congestion when motorcycles would be stopped to check the relationship between the motorcycle driver and the back-rider.

Alegado said he prefers motorcycle taxis as a mode of transportation since physical distancing is usually not observed in four-wheel vehicles being used to transport commuters.

He noted that motorcycle drivers could wear masks and use alcohol as sanitizers to prevent the spread of the coronavirus to their back-rider. (PNA)