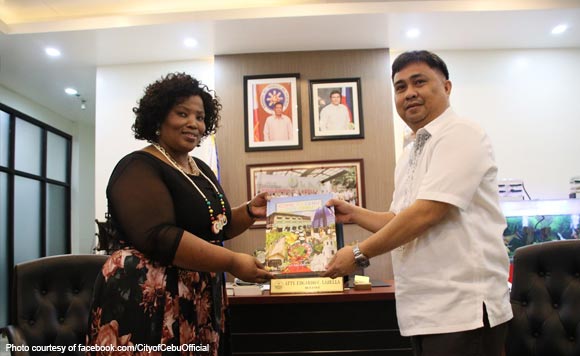 0 686
Share
Want more POLITIKO News? Get the latest newsfeed here. We publish dozens and dozens of politics-only news stories every hour. Click here to get to know more about your politiko - from trivial to crucial. it's our commitment to tell their stories. We follow your favorite POLITIKO like they are rockstars. If you are the politiko, always remember, your side is always our story. Read more. Find out more. Get the latest news here before it spreads on social media. Follow and bookmark this link. https://goo.gl/SvY8Kr

The Cebu City Government is looking at forging sisterhood ties with South Africa.

Ambassador-designate Bartinah Ntombizodwa Radebe-Netshitenzhe of the Republic of South Africa to the Philippines paid a courtesy call on Mayor Edgardo Labella on Thursday.

Lawyer Jerone Castillo, special assistant to the mayor, welcomed Netshitenzhe on behalf of the mayor. (https://bit.ly/2T6V7bc)

Castillo said there was a discussion on establishing a “sister-city relationship” between Cebu City and South Africa.

“This is the first with South Africa. Cebu City and South Africa share so much history and so many things in common. So this will be history again,” according to him.

The sisterhood ties, according to him, would enable Cebu City and South Africa to venture into cultural exchanges and to share knowledge and strategies that could improve the socio-economic conditions of their constituents.

“We have so much potential to collaborate in terms of business and economic activities,” Castillo said.